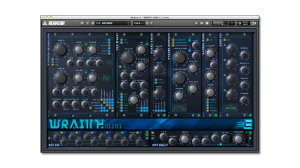 WRAITH is a Polyphonic Modular Analog Synth with a patchable modulation matrix and two independent sequencers.

WRAITH is available in three form factors, WRAITH-SQR has two built-in sequencers that can run independently to each other, the larger WRAITH-Fbxi is the same as the SQR version but has a separate effects section, WRAITH MINI has all the same synthesis capabilities and is better suited for smaller screens.

Wraith has two main oscillators, each with two simultaneous waveform generators, oscillator A uses a sine-wave generator and a choice of triangle, saw or pulse, whilst oscillator B uses pulse and a triangle generators, each oscillator has a variable shape, it is also possible to add drift to the waveform adding greatly to the harmonic content.

The outputs of both oscillators are hard wired to a Ring Modulator with its own output to the mixer.

Switchable hard sync will lock oscillators A and B together in phase, but still allow the modulation and sync sources to take effect.

WRAITH has a comprehensive set of filters and two built-in sequencers, full details of WRAITH and its capabilities are available at the ET website.

I really like Wraith SQR (the bigger version, with the sequencer). I've had Reaktor for several months, downloaded a Lot of ensembles for it, and built a couple myself. I think Wraith sounds better than most Reaktor ensembles. I don't know why, and I'm not sophisticated enough to comment on how exactly, but to me the sound seems richer, with more depth and brilliance and vividness. It has almost a tactile quality.

I'm really interested in virtual modular synths, and I've noticed what a wide variety of interfaces they have. Some are very complicated, some are overly simple, some are hard to figure out. Some have modulation grids that are a total mystery to me. For me Wraith occupies a sweet spot - enough detail that I can do a lot, enough simplicity that I always feel like I know what I'm doing. There are some Reaktor modular ensembles where I never feel like I know what I'm doing, and most of the time I can't even get a sound to come out of the thing. But with Wraith I can understand the signal path and do what I want to do.

And finally, the 22 skins and the large detailed slightly translucent knobs are really really satisfying. If I had a RL version of Wraith, I'd love it, it would probably cost about $5,000, but it wouldn't be able to do polyphony or unison. I'm happy with Wraith. The price seems quite reasonable to me.

I am not affiliated with ET and do not work for them. I just admire what's been achieved here. ET's other modules have been wild explorations into realms I haven't always even really understood, and I've admired them even when I've felt baffled by them. But Wraith is in many ways the virtual synth I've wanted for a long long time.