YAVA by Krakli is a Virtual Instrument Audio Plugin for Windows. It functions as a VST Plugin. 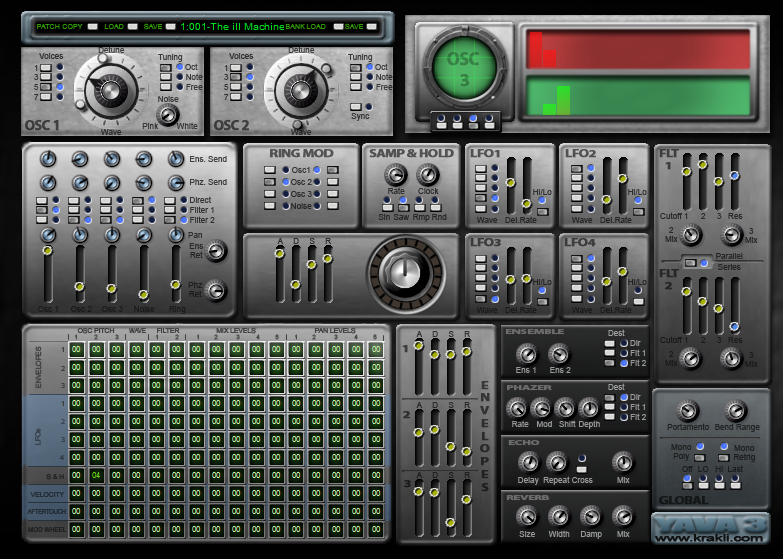 YAVA is a highly configurable and flexible Mono/Poly synth. The package also includes YFG - a totally off the wall sound-fx VSTi.

User Interface - It's purple, very purple, with white lettering and lights. Yava 2 is layed out well, and easy to navigate, (and yeah, white on purple is kinda weird, but not that bad really), if anything, the Gui size is a slight bit large, but not without reason. Let's go 7, it's not really a "beautiful" sight, (unless you really like purple, I wonder if Odo has this synth ha-ha), but it's more than good enough to use and doesn't give me a headache or anything crazy ha-ha.

Sound - Yava 2 is listed as a *hybrid* synth, but the manual says it's a *virtual analog* synth. Well, I thought it sounded warmly digital, or digitally warm ? If this was a blind test, I'd have guessed an fm synth with lots of fx and modulations. You can get some pretty fat sounding brassy, pad, and just old skool "synth" sounds out of it though, and many of those types are included in the presets. Overall, it sounded a bit digital to me, and the presets seemed to lean toward a more fm sound, but a warm and complex fm sound. I'm going 8 here, it's got one foot in analog land, and one in fm land, with enough modulation to wobble and gurgle with the best of them.

Features - Lots of features, this thing is feature-ridden ha-ha. There are 72 knobs just in the mod matrix alone, in addition to some gating and dual frequency sequencers ! I could go into detail, but lets' just say, tweaker's heaven and leave it at that eh. I'm giving it a 9 here, despite not really getting into programming this synth. In addition to the massive modulation matrix, it also has some other unique-ish features and oscillator setup. :)

Documentation - A good .pdf manual with many pictures is included to clue you in. I'm going 9 here, there is some extra info about the unusual features, and some close-up pics to really make sure you're seeing what is being typed about in the manual. This is how it should be done.

Presets - A full bank of 128, and quite a variety overall, some wild stuff in here including some rhythmic loop type stuff, and lots of morphing/evolving type sounds. Let's say 8 for the presets, a lot of them are ready to be played right out of the box, and lots of variety.

Customer Support - Hasn't been an issue, but Krakli is a K-v-R reg, so no worries. Another 9 just because Krakli has been around these parts forever, and is a very experienced dev, I can't imagine it would take long to get a response about this synth.

Value For Money - As with most SE built plug-ins made by K-v-R regs, it's above and beyond in the value department. Other that cpu usage and a few clicks, it's comparable to the $100 big time synths out there in many ways. 9 again, sure there's probably something out there that's a better value, but this is a rare value.

Stability - No crashes or lock ups yet. As mentioned above, the cpu can go up a bit depending on what all you have going on, but the absolute most I saw was about 24%, and it seemed to average around 12%-16% with a couple notes going, and with some longer sounds trailing and burbling away. I'm going to go 8 here, since the cpu is a bit high sometimes, and I did get some clicking on a few patches, no crashes or lock ups occured though.

Final Thoughts - What happened, why didn't this synth take off ? Maybe it actually has too much going on in a way, but even so, with 128 good presets, anyone could've at least tweaked some new sounds out of it from those. A treasure from the past for sure, yeah, there's better out now, but not in this price range. Perhaps this synth will someday be resurrected and updated, with newer/more efficient SE modules and given new life, we can only hope. :)Read Review

The current version is 3!!.