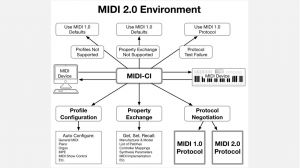 At the Annual Meeting of the MIDI Manufacturers Association during Winter NAMM 2020, MMA members in attendance unanimously completed the adoption of the core MIDI 2.0 specifications including five core documents:

In 1983, musical instrument companies that competed fiercely against one another nonetheless banded together to create a visionary specification—MIDI 1.0, the first universal Musical Instrument Digital Interface. Nearly four decades on, it's clear that MIDI has remained viable and relevant. Its ability to join computers, music, and the arts has become an essential part of live performance, recording, smartphones, and even stage lighting.

MIDI 2.0 takes the specification further, while retaining backward compatibility with the MIDI 1.0 gear and software already in use. Features include:

MIDI will continue to serve musicians, DJs, producers, educators, artists, and hobbyists—anyone who creates, performs, learns, and shares music and artistic works—in the decades to come.