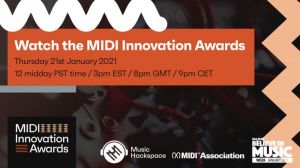 Music Hackspace, the MIDI Association, and NAMM have now closed the entries to the first MIDI Innovation Awards. The process of selecting 10 finalists from 78 entries - including hardware, software, and even installations based on MIDI - is now complete.

During the awards ceremony, the winner of the Popular Vote will be announced, and the top three entries will win prizes worth over $20,000.

According to event coordinator Jean-Baptiste Thiebaut of Music Hackspace:

We were taken aback by the level of creativity, imagination, and innovation in the entries - and believe the livestream viewers will be as surprised and delighted as we were.

Discover the finalists, and cast your vote, by clicking here.

Watch the teaser of the event

...and set a reminder for the livestream on YouTube