crimsonwarlock
KVRAF
2291 posts since 18 Apr, 2001 from The Netherlands

For starters; I've read the sticky about soliciting developers. I'm a software developer myself (corporate systems etc. 30+ years experience, over 1.5 mln lines of code written in over 20 languages) so I'm well aware of the work involved

Having said that, I'm looking for a freeware developer (or a commercial developer who wants to do a freebee) who is in search of a nice project

I started out in music by building my own hardware lead synthesizer (also more then 30 years ago), learned to play it and went on playing in several bands (mostly progrock). After several years I replaced it with a commercial lead synths (a Teisco 110F) and it got 'decommissioned'. However, although it's no longer in working order, I still have it lying around and as it has quite a special configuration it would be fun to build it as a VSTi. It's basically a straight analog monophonic synth but it has a combination of several real and divide-down oscillators that results in a total of 30 stacked waves (on one voice, as it is monophonic). It has only square and pulse waves (with PWM). The resulting sound is huge

I don't care on what platform it is being developed, can be native code or something like SE. It doesn't have to be monophonic, but building this thing in a polyphonic version might be a bit heavy for cpu-loads. Although I have no idea how divide-down oscillators tax a cpu, or that something like this can be build in SE for example. Other additions to it are welcome as well, as long as we don't deviate too much from the original sound-wise.

Also, if any gui-designer likes to participate I would welcome that also.

Bottom line; there's no money involved, I'll participate myself as much as possible with information, testing feedback, graphic stuff if needed, etc. Look at this as a fun project that will bring a synth back to life that is a more or less a basic VA but with a twist. It might be a nice experience for everyone involved.

If there is any interest in doing this, I'll post specifics and pictures of the actual synthesizer.

Final note: before someone replies asking why I don't do this myself (me being a software developer and all), the kind of development that I do is very different from DSP-development, and I'm also doing several Open Source projects in my free time (besides development during the day job) so I really can not find the time to start learning DSP or something like SE for that matter. It's just too much already

Last edited by crimsonwarlock on Fri Sep 13, 2013 2:44 am, edited 1 time in total.
CrimsonWarlock aka TechnoGremlin, using Reaper and a fine selection of freeware plugins.

Just post a few sound samples and technical details, if it is interesting enough, someone will implement it.
~stratum~
Top

Full Bucket
KVRian
736 posts since 25 May, 2010 from Hessisch Uganda, Germany

crimsonwarlock wrote:If there is any interest in doing this, I'll post specifics and pictures of the actual synthesizer.

Yes, would be very interesting if not helpful!


Full Bucket wrote:Yes, would be very interesting if not helpful!

Hey Björn, I was hoping to get your attention, based on your stuff so far, this should be right up your alley

So here are some pictures: 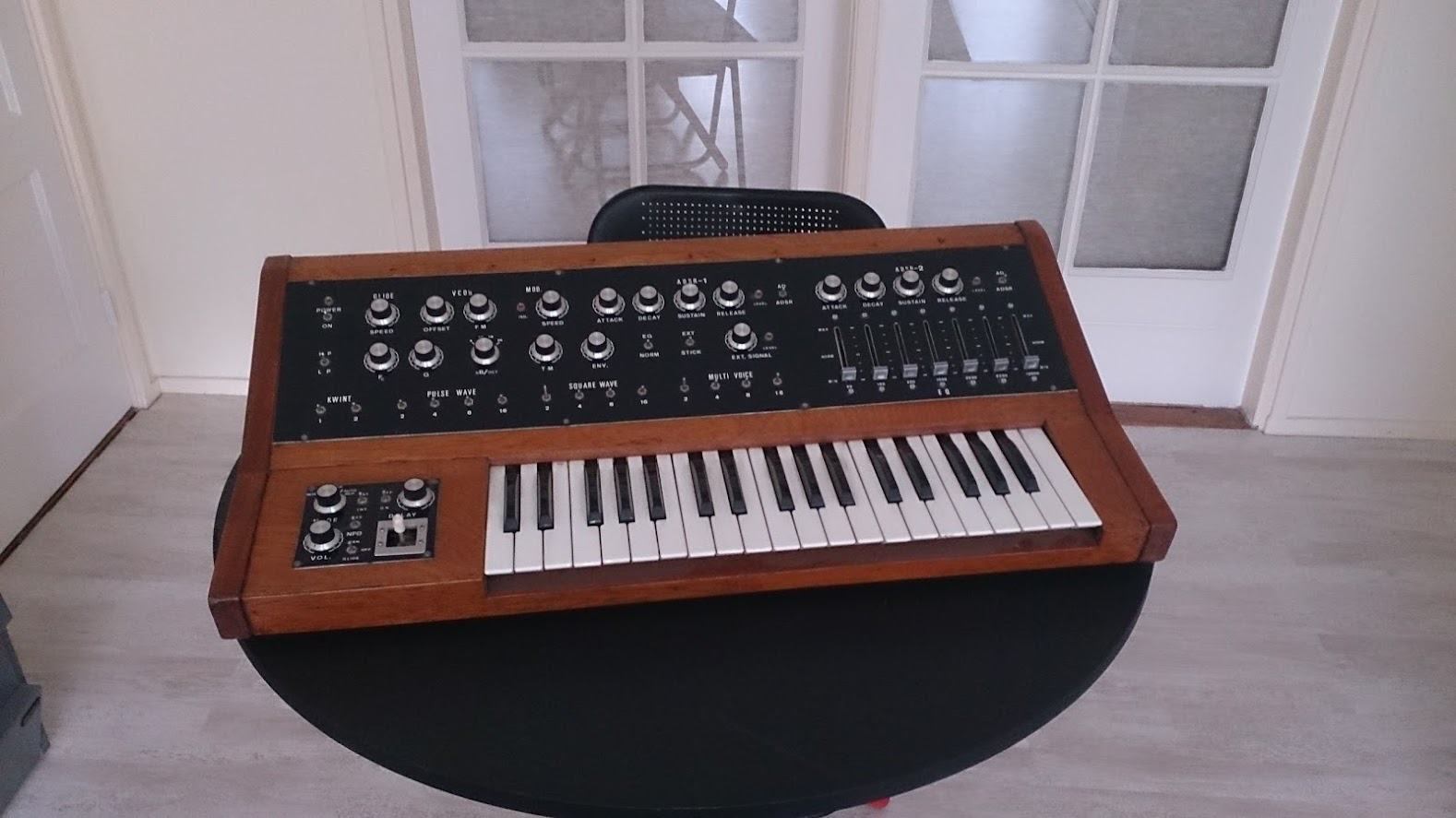 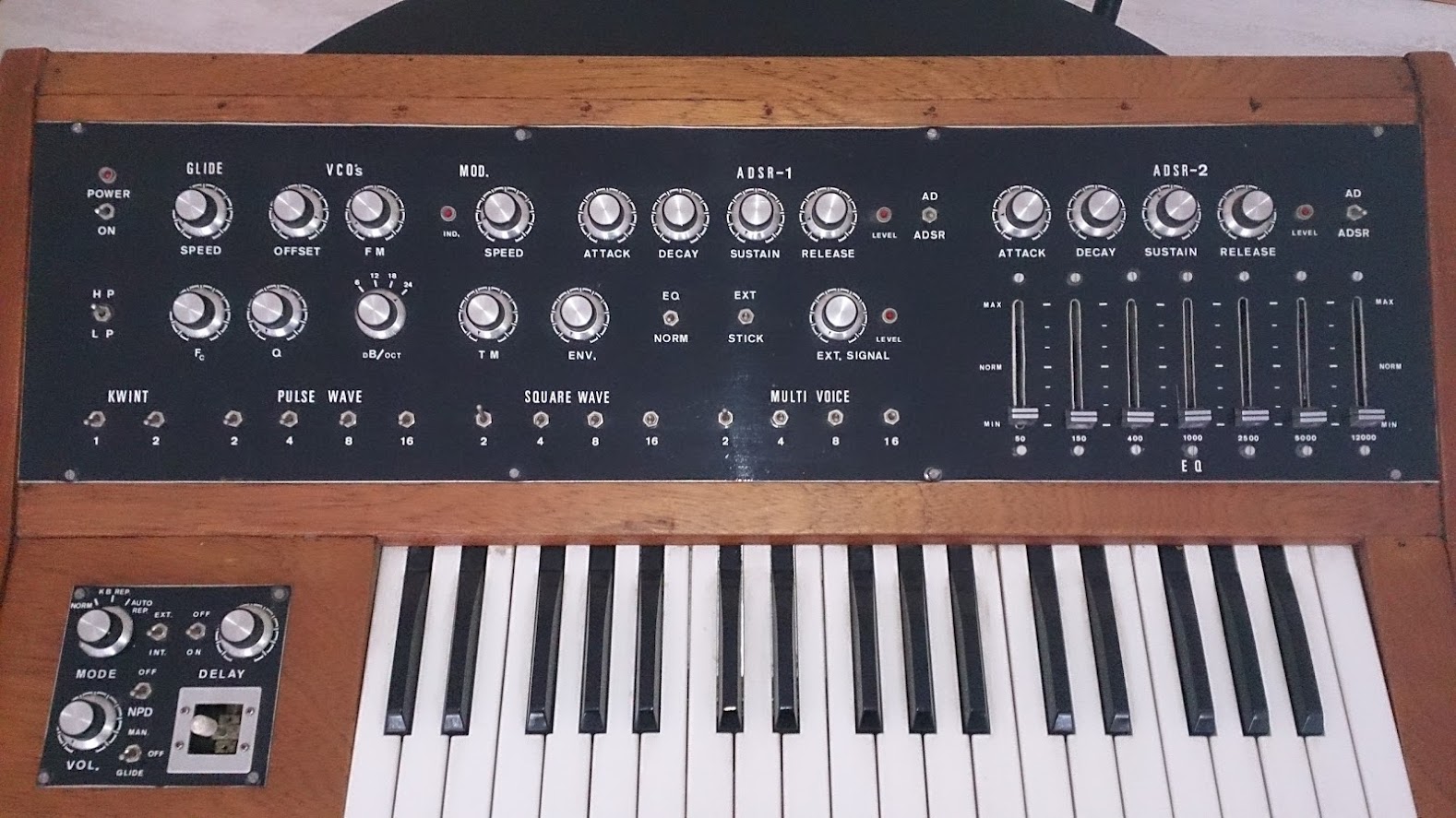 Unfortunately no sound samples as this thing hasn't been working for years, and never been used in recording only live gigs. Safely to say though, that something like the solosound in ELP's 'Lucky Man' is pretty close to a signature sound of this synth.

NOTE: right-click on image, view image for a full size image.
CrimsonWarlock aka TechnoGremlin, using Reaper and a fine selection of freeware plugins.

Looks cool! But i can definetly say that implementing this synth in all aspects isnt easy and it will be cpu hungry
Top

Full Bucket
KVRian
736 posts since 25 May, 2010 from Hessisch Uganda, Germany

Do you have some schematics (signal flow, modulation paths, etc.)? I must confess that I don't get all the details from the panel...

Looks like a sexy piece of gear! I have zero experience with synth dev, but I'm interested to hear details about all these exotic options.

Who built the original? Is a user manual available?
Fabien from Tokyo Dawn Records

Do you have some schematics (signal flow, modulation paths, etc.)? I must confess that I don't get all the details from the panel...

Have to do some digging for schematics, but they should still be around... somewhere. But as I just moved house over the last few months, finding that stuff might take some effort

It basically has four oscillators. Three are slightly detuned and stacked, and can generate square- and pulse-waves at the same time. They are also run through a divider to get all the lower octaves. The fourth generator is tuned at four notes up (like C -> G), much like a power-chord interval, and divided down one octave. This oscillator only generates a pulse wave. The long row of switches actually switches all the generated intervals on or off. The multivoice switches switch between one or three (detuned) oscillators for each interval, simultaneously for both waveforms (square and pulse). There is no PWM (I was wrong stating that before), but anyone will understand that this synth does not need that

The oscillators are fed into the filter, which is basically a filter-module from the Formant Modular, same goes for the ADSR-units. Finally the signal was going into the EQ for some final adjustments. FM on the oscilator-section above is actually vibrato amount, offset is main tuning for the whole synth. LFO does vibrato and is used for triggering the repeat function.

The performance section besides the keyboard has settings for portamento, the repeat stuff is an internal trigger from the LFO or could use an external trigger signal (pulse). The joystick did pitchbend and filter-cutoff. The delay-knob is actually an adjustable ramp that fades in the vibrato.
Last edited by crimsonwarlock on Sun Sep 08, 2013 9:08 am, edited 1 time in total.
CrimsonWarlock aka TechnoGremlin, using Reaper and a fine selection of freeware plugins.

FabienTDR wrote:Who built the original? Is a user manual available?

I build it myself. It's actually a mashup of several synthesizer kits. Back in the days I also build a 10-band analog vocoder, a 10-step sequencer (build from an electronic doorbel kit) and several distortion/fuzz pedals. Those where the days

So no, there's no user-manual. Didn't need one for the obvious reason that I build it

CrimsonWarlock aka TechnoGremlin, using Reaper and a fine selection of freeware plugins.

Just found the original documentation of the basic synthesizer (the actual oscillator section in my synth) online: http://rubidium.dyndns.org/cag/pdf/chorosynth.pdf

CrimsonWarlock aka TechnoGremlin, using Reaper and a fine selection of freeware plugins.

The pdf is a dead link.
The synth looks good I must say!
David Guda gudaaudio.com
Top

davidguda wrote:The pdf is a dead link.
The synth looks good I must say!

Thanks for the compliment

The link worked yesterday, seeing it's a dyndns linked server it's probably on someones home machine that is not online all the time. Nevertheless, matt42 gave a solution (thanks for that).
CrimsonWarlock aka TechnoGremlin, using Reaper and a fine selection of freeware plugins.

Do you have specific information about what kind of filters are necessary to convert the mentioned %25 duty cycle wave to strings/woodwind-like sounds? The paper mentions this briefly but does not describe it any further, leaving reverse engineering as the only option.
~stratum~
Top

Do you know what's wrong with the synth? Would be cool if it was possible to fix it (it seems that you have experience in electronics), to hear how it sounds like ... of course project like this probably won't go very deep into peculiarities of analog modeling (hope it would though

) but still the sound would be nice as reference I guess for people involved.
circuit modeling and 0-dfb filters are cool
Top
30 posts

Return to “DSP and Plug-in Development”