Dream into action: An interview with Ikutaro Kakehashi (Founder of Roland)

Ikutaro Kakehashi is a dreamer, who has been making products for musicians for 57 years. He founded Roland Corporation in 1972. The number of products and technological innovations from Roland during his watch is absolutely mind boggling. He has touched just about every category of music product, from keyboards, to guitar synthesizers, to drums, and there has always been something clever in each product, regardless of the industry it was intended for. Whether it was the kind of sound or a certain way that it worked or maybe just a particular problem that his products solved.

Everyone that knows Mr K will say that he is a terrific listener. That he talks to the artists that use his products, which in turn informs the features of his next product. Rather than make instruments for the sake of the instrument, or the technology, he has always tried to figure out what instruments would inspire musicians to go in new directions, and and help them express themselves in new ways. 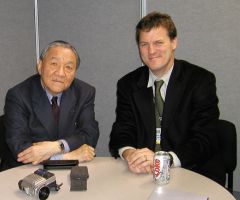 Mr K with a fan

Mr K, as he is affectionately known in the industry, recently released a book called An Age Without Samples - Originality and Creativity in the Digital World.

It was a real honor to have a conversation with Kakehashi-San. I've admired him for many years. The volume of output and diversity of things that he has done in our industry is quite inspiration. Getting him to talk about himself was not easy. He doesn't do it naturally. His calm and humble demeanor disguises an intense determination and drive, however. Nobody can achieve what he has without these qualities.

Do you have an engineering background? Are you a musician?

My background is in mechanical engineering. Not musician. Some of my family were musicians, but not myself. Probably I got some influence from my family (chuckles).

What was the first product that you developed? 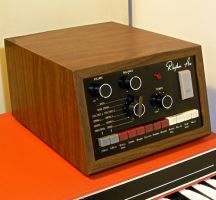 The Rhythm Ace machine was my first product for Ace Electronics. I entered into a partnership with Hammond. So it was two companies, many shareholders, and many, many different opinions. So, after that I decided to build a different company.

Were you trying to solve a particular problem with Rhythm Ace?

At the time digital machines sometimes were very useful for drums.

Did you have other musician friends at the time or were you just developing for your family?

Just family, and good friends, like Mr. (Isao) Tomita a musician and composer. Many, many Japanese artists.

You were developing analog synthesizers much earlier, but the introduction of the digital Yamaha DX7 was a huge event in the market...

I thought the DX7 would take over the market because it was lightweight and portable. It had a new sound, very unique, and the price was very cheap. About two or three years later we did an analysis and found out that the DX7 marketing had increased sales of our products like the Juno 106.

Did you start development of the LA chip (in the D-50 synthesizer) before the DX7 came out or after that came out?

We were already working on the LA chip before the DX7 appeared. When I have a product idea I like I like to show it to people to get their feedback. Do you remember the band Toto? Steve Porcaro was the keyboard player. He came to Japan and he wanted to play our keyboard. He liked it very much. So we keep in connection. Then we started to invent the product. So many products started from Toto.

The D-550 Rackmount with LA Chip inside

You started doing sequencers in 1972. Did that vision evolve from your interest in rhythm machines, or was there something else that triggered to your thinking of recording musical events like that? 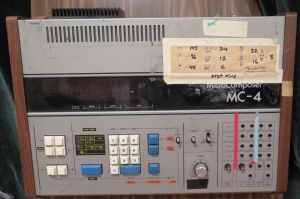 We looked at recording and sequencers as the same thing. In the beginning, it was targeted differently. We originally intended Microcomposer to be for our large modular system customers, but it actually became a very good seller for all people that had synthesizers. So actually many new things happened as people started to use it. Especially film composers.

As the commercial synthesizer market started to develop was there much interaction between Roland and Yamaha and Korg at the time, or were you totally separate and competing very strongly?

Yea, yea. Everybody was very competitive. We never fought dirty though.

Can you tell me about any thoughts you have on the development of MIDI itself? Was it hard getting everybody to agree on the standard?

I think it wasn't so much a problem. You must listen a lot. Before MIDI became standard, things were more difficult, and that's always a reason to make something. It was hard at first, but very important. Without standards in the industry, it would never grow. We need standards.

What is it about your personality that you think contributed the most to Roland's success?

I think I am straight and direct, nothing else.

But you must also be very creative...

Um.. I hope so. (laughs) Now I want help newcomers, young people in our market. Today I try to create new young people, not older, products with some success. That's all. People can create. New person creates something.... Now my new products have a younger vision.

So the product you're most proud of is the next one... What can you tell me about ATV, and its products? 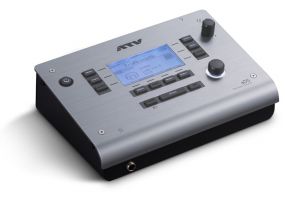 I started the company with Makoto Muroi, who was with me at Roland. I think our aD5 is the next step for a drum machine and percussion. Same great sounds. But a new approach to technique. If you play with skill, you can create a new sound.

I think video is also very important and ATV is involved with that too. When you look at large stages without picture today, the stage is nothing. The main part of stage entertainment is video.

Because the venues are so large... 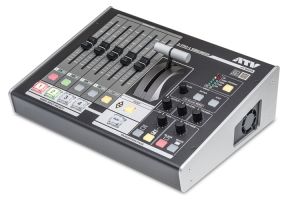 Today, video is so important so people will have more enjoyment at concerts. I think video is the next step for music industry, video combined with music. We have several products that address this.

Audience. Without audience, nothing happens. So the audience appreciates the product. So, my answer is difficult to give straight. But it's true though, who can enjoy—the audience will decide what is the most important.

The Jupiter 8 was one of your first synthesizers, before MIDI. And then the JC120 was the first amplifier with a built in analog chorus. And later you took a big share of the drum market with your electronic drums. That's a lot of different customers with different perspective and disciplines. How did you manage to keep all of that together?

I never tried to manage customers. I think musicians have managed me.

So your ability to listen to customers has contributed greatly to your success...

Is there anything that you'd like to say to the people that grew up with your products?

I think today, most important is live music. Play on stage. This is the key. One or a thousand in the audience, doesn't matter. I think live music is the key.

I have one last question. There's a sign behind your head and I'm wondering what it says...

In Japan, when people reach the age of 80 we have a celebration. This is a Haiku to recognize that for me.

The number of iconic product produced under Mr K's watch is stunning, and they span almost every category of the electronic music market, including drums and drum machines, guitar synthesizers, emulators, and amps, effect processing devices, samplers synthesizers. Just as an example here are some Roland products I have personally owned over the years:

At the Roland R&D Center in Hamamatsu, Japan, Roland maintain a private museum that exhibits Roland and BOSS musical instruments that date all the way back to their foundation in 1972 and span the genre-defining musical eras of the '80s and '90s. The instruments on display are extremely important, and are still used as references for current product development.

The video below allows you to experience the Roland Museum in a 360-degree tour. It also includes aerial views of Roland Headquarters, the Miyakoda Factory, and the R&D Center: youtube.com/watch?v=0h8Z3-mCw0g