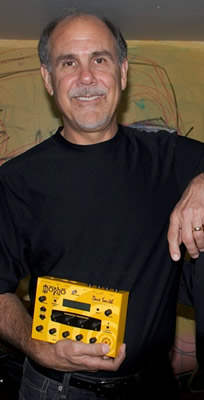 There are very few people within the electronic keyboard and music technology markets that would not recognize the name Dave Smith. Many consider him to be a visionary, developer of several lifetimes of products, and the father of MIDI. What a lot of people don't know about Dave is that he was also the first, or at least one of the first to create a software synthesizer.

Dave Smith was born in San Francisco. He received a degree from the University of California at Berkeley in Electronic Engineering and Computer Science. After college he first took the more traditional path of working within the aerospace and the semiconductor industry at the time when things were just starting to happen in the evolution to what is now known as Silicon Valley.

During that time he also exercised his hobby, which took the form and playing guitar and bass in some jam bands in the late '60s. His first company Sequential Circuits was founded in 1974 and marketed some of the first commercial synthesizers and sequencers.

Dave, who passed away in 2022 was was a larger than life character in this industry we all love. We remember Dave the man as always being warm, and cheerful, a natural sense of humor, and an easy laugh. He was blessed with both brilliance and humility, and his amazing record speaks for itself.

How did you get into the musical instrument business? What was the original inspiration for the Sequential Circuits?

This all started as a hobby, a combination of my technical background and my interest in music. I had bought a MiniMoog in 1972 that got me hooked. I still have it. I started making my own accessories for it, and eventually designed an analog sequencer. I wanted one to use with the mini-moog, but the Moog stuff cost too much, so I learned how to build one. This was in 1974 and was was called the Model 600. I sold 3 or 4 of them.

The second product was the Model 800 Digital Sequencer in 1975, followed by the Model 700 Programmer, which allowed sound programming of the Mini Moog and the Arp 2600. It enabled me to finally quit my day job in 1977 and jump into musical instrument design full time, though I was largely living off credits cards.

Next came the idea for the Prophet 5. I had been using microprocessors for years in my day jobs, so I knew what they could do. I also found out about a new synthesizer chip set; I thought the combination would be perfect for what I wanted to do, which was build a completely programmable polyphonic synthesizer.

It's funny because at the time I thought the idea was so obvious that Moog and Arp (the Big Two at the time) must be doing the same thing, so I waited a few months, not wanting to compete directly. When it seemed like they were not going that route, I went for it.

In retrospect what were the conditions within the industry that allowed MIDI to be standardized?

At the time the industry was still small. And once we got started, there were only a few synthesizer companies involved with the specification (Roland, Korg, Yamaha, Kawai). So, we could move quickly, and I knew with that set of companies involved, the other companies who initially chose not to participate would have no choice but to also implement MIDI eventually.

How do you see the future of MIDI? New capabilities? New transports? New uses?

It's funny. MIDI 1.0 has been around for 30 years and it still works! You connect an instrument that was built back then into one built today and it works. Virtually no other standards have existed that long at version 1.0, and it's used every day everywhere in every music studio. At this point it is somewhat outdated and certainly slow, and it could be greatly improved.

Over the years there have been a number of new interfaces in the works, and those involved with these protocols attempt to get consensus and selection of their approach as the replacement for MIDI. The trouble is, there are way too many entities involved to get agreement. It's not just synth companies anymore; anyone who builds any sort of musical instrument, any sort of computer, of video gear, live sound product, lighting....

So, there are hundreds of companies with a vested interest in a new communications standards. Good luck getting enough of them to agree with each other! If a new standard emerges eventually, I will be glad to implement it. In the meantime we'll use MIDI and USB which cover 99% of what people need.

You have been making musical instruments since the late 70s. How would you summarize the changes to our industry that have occurred since you started your first company?

The biggest single change is the emergence of computers and software in all aspects of musical instruments and pro audio. I used to predict a long time ago that some day your whole studio, including recording, your instruments, processing, mixing, etc would be in one little box. I just didn't realize that the box would be a computer.

So many bands are using recorded backing tracks which blurs the line between performance and simple playback. There's nothing to watch when someone is performing in front of a laptop. You don't know whether they just hit the play button and are actually checking their email.

In my case, the whole design process is far better now than it used to be. There was actually a period in the late 80s and most of the 90s where someone like myself couldn't go out and start a company and build products, because the investment for custom circuits was simply too high. Now I can sit at home and design products on a cheap computer, using inexpensive but sophisticated design tools.

In the old days if I wanted to find a part for design, let's say an IC, I would first have to call up suppliers and have them send me their catalogs. I would have to wait until they showed up and then go through all of them. Then I would have to make a bunch of phone calls to find out what the part would cost, if it was really available, try to get samples and all of that. This whole process would take a lot of time and you would end up with a room full of catalogs that would go out of date every 6-9 months.

Now you hop on the Internet and describe the desired part on Google. You check a link and download a spec on the part and you are done in a few minutes. There are also tools that allow me to design enclosures on the computer. For circuit board design, in the old days I would cobble together a design with black tape on sheets of mylar. Now I can design a schematic using the same boards design software, rather then pencil. And, the schematic and circuit board layout are matched and tested, something that would take many tedious hours before.

You were involved with Intel with the development of the first native software synthesizer. How did that come about? Why did you do it?

This was in the mid-90s when I was president of Seer Systems. We designed a software synth for Intel that they used to demonstrate the power of their new Pentium processors.

We then designed a second generation soft synth that we licensed to Creative Labs, (the premiere sound card manufacturer at the time) who bundled it with one of their sounds cards. The third generation we did on our own as a product called Reality, the first Professional Software Synth. Each version got a more powerful as computers were getting faster.

I stopped working with soft synths for several reasons. First, I never found myself playing with Reality, and I had always played with my own instruments. It sounded great and had a lot of nice features, but I was just staring at the computer screen and typing on a QWERTY keyboard and using a mouse rather than moving buttons and knobs while I played. It did not feel like a musical instrument.

Then, you have to continually port it to so many different platforms and fix so many OS related issues as they come up. It's much more fun to design new instruments than to constantly update old instruments. Plus, as I have predicted all along, a software synth you buy today will not work in 5 years, unless you continually upgrade it.

Also, I didn't want to compete with 'free'. I figure that anyone who has graduated from college can write a software synth and half of them have (laughs). And now with ipads and iphones, the "software musical instruments" are becoming disposable.

Of all the products you have made over the years what is your personal favorite and why?

That's like asking who your favorite child is. It's really hard to answer. The Prophet 5 my first and possibly the most well known, but when I play my old Prophet 5 it seems nice and quaint; I mean it sounds great, but compared to our newer instruments it seems limited and dated.

What did you learn about Sequential that you have applied to the new Sequential?

I knew that I didn't want to have a big company again; just too much work and too many distractions. Sequential had around 170 employees! I prefer my new company with a very small number of dedicated people. When I started DSI, I realized that I could do everything out of my home; no overhead, no infrastructure.

What can people expect from you next?

Check out our booth at NAMM.

More recently Dave has cooperated with Tom Oberheim and Marcus Ryle to produce a new build of the also legendary Oberheim OBX.

Do you have any advice for other developers on the best route to take when riding a bicycle across the country?