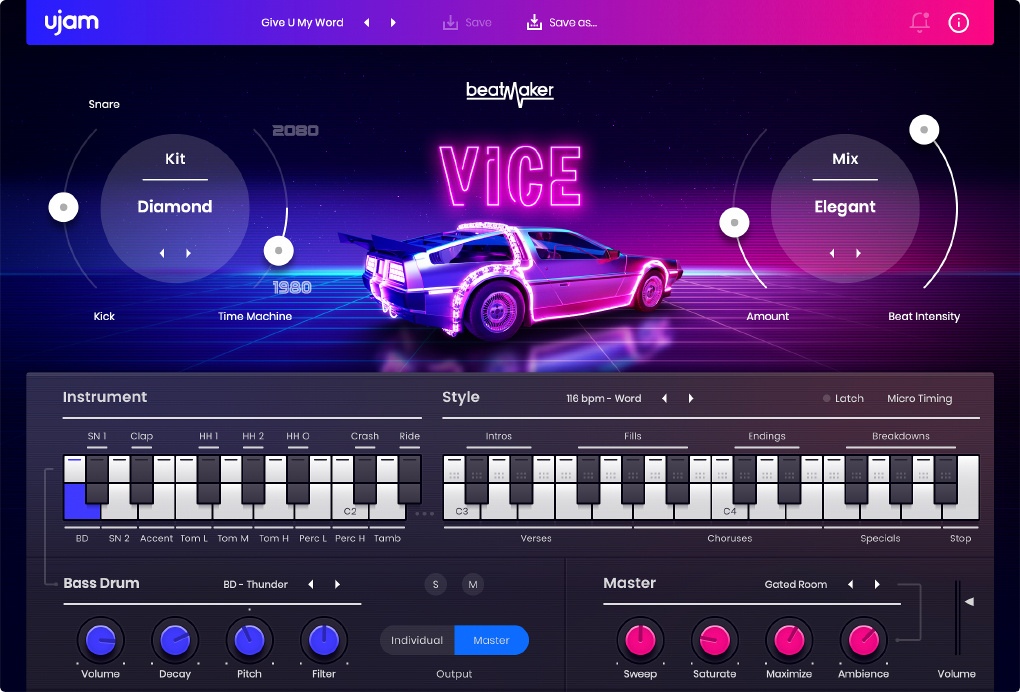 Maximum retro futurism for digital drums: Everyone knows and loves the vibe of science fiction and horror movies from the 1980s. VICE delivers the perfect drum tracks for music that captures the sci-fi atmosphere. But it's not only a flash from the past. It's the aesthetics of a golden era, revived with today's top notch sound quality. The 1980s are back in mainstream music, particularly Synthwave – bigger and better than before. Take the fastlane to top chart positions with Beatmaker VICE.

Which sounds pop into your head when you think of the 1980s? Cheesy pop music with big synths, punchy digital drums and lots of gated reverb? Recently those sounds have been re-invigorated by 2010s producers and turned into genres like Synthwave, Retrowave, or Futuresynth. These EDM genres are influenced by 1980s film soundtracks and video games. Inspired by composers like Jean-Michel Jarre, Vangelis, and Trevor Horn, they contain 1980s clichéd elements such as electronic drums, gated reverb, and analog and early-digital synthesizer sounds. VICE delivers exactly these drum parts you need to create anything from authentic '80s to Synthwave.

VICE turns your drum programming into an ulta-modern adventure with a retro touch. Inspired by some of the most legendary classic drum machines from companies like Linn, Roland, Simmons or Korg, VICE feels a bit like a time-machine.

This virtual drum machine is suitable for 80s veterans and aspiring Insta-producers alike. VICE's transparent interface turns your tracks into cheesy pop music in a glimpse. Easy macro controls and no hidden menus; everything is clearly laid out for you.

Features at a Glance

With 10 separate kits, 12 smart-mix presets and a built-in FX to make punchy digital drums with lots of reverb, VICE is the perfect tool to glue together your refined 21st century sound integrity with legit 80s vibes.

Let your drum tracks travel in time: from the sound of 80s tape recording and early sampling artifacts to a full and heavily pumping future of an imaginary year 2080.

Lets you control the speed and timing of your beats. Dial in the tempo of your host from half to normal to double speed.

Export patterns to your DAW. Simply drag them from the on-screen-keyboard and drop them into your track.

Edit and control the volume, decay, pitch and filter of individual instruments per drum kit.

BM Vice is a drum plugin of considerable talent that would make a capable replacement for the likes of Battery or Groove Agent for those who don't want to spend hours sorting out their drums. Like the other instrument's in Ujam's Beatmaker series, Vice offers instant gratification with enough depth to allow you to tweak everything into something that is uniquely yours.

The basic workflow is that you pick a top level preset, find the right pattern and trigger it from your sequencer. Like all of Ujam's instruments, the pattern buttons are arranged in a keyboard-like fashion so it is obvious which key you need to use to trigger a pattern. It is super-quick and easy to establish a great sounding beat for you to work from.

Patterns are arranged in preset groups. Within each group you get a couple of intros, a few verse patterns, some chorus patterns, a few fills and a couple of outtros, all spread over two octaves of keys. All up, I think there are more than 1000 patterns. Similarly, there are several different kits to choose from. Each kit has two different kick samples, two snares and various other percussion sounds. Lastly there are effects, again organised into a bunch of presets. Each top level preset, then, consists of a kit, a pattern group and an effects preset and there is plenty contained within those top- level presets to get you going. But it doesn't have to stop there...

There are several levels at which you can customise BM Vice to get your own, unique sound. First up, there are four macro sliders. On the left side you can alter the balance between the kick and snare and how much the kick pumps (compression) and on the right side there are sliders for the effects mix and intensity. You can also select a different kit, a different group of patterns and a different effect preset.

At the next level down you have individual control of volume, decay, pitch and a low-pass filter for each individual drum sample. You can also swap sounds between kits to create your own custom kit, but only like for like. e.g. You can swap Kick 1 in one kit for any kick in another kit but you can't swap a kick for a snare. You can also select either a single output or multi-out (a separate mixer channel for each sample). On the opposite side of the GUI you can adjust four parameters in whichever effects preset you are currently using.

The last level of customisation allows you to add extra hits to existing patterns, using your host's sequencer. The two octaves below the pattern octaves allow you to trigger individual drum hits, which means you can change the preset patterns easily, or create your own from scratch, so that every part of the patch is uniquely yours. You can also drag 'n' drop any preset pattern into your sequencer to create MIDI from it.

OK, all of that applies to every Beatmaker plugin, what's different in BM Vice? It's the style - BM Vice is all about the 80s and is full of drum sounds from classic 80s drum machines like the LINN Drum. Of course, it wouldn't be the 80s without those classic Simmons drum sounds and massive reverb, both of which are present and correct in BM Vice, the former via a kit and the latter through one of the effects presets. The patterns are also geared towards 80s synthwave type music, although I have found them to be much more versatile than that. Like its siblings, the bests thump and everything sounds great, right out of the box.

What makes all the Beatmaker plugins so good is that you can put in as much or as little effort as you like, yet you will always get great sounding drums. That means you can start off with a preset and refine your drums as your project progresses, until the finished product is uniquely yours, not just a preset 500 other people are also using. For $69 they are all crazy good value.