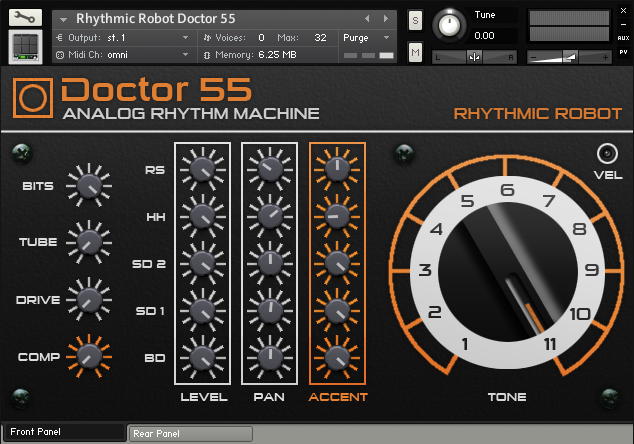 What is it?
Drum MachineAnalog Drum MachineDoctor 55DrumsElectronicKontakt InstrumentRhythmic RobotSamples
Format(s)
Operating System Availability
Audio Demos
Doctor 55 Demo
License & Installation Method
Voucher / Code for redemption on other website
Tell Me More
Important Note
Requires a FULL version of Native Instruments Kontakt v4.2.3 or later (including all versions of Kontakt 5). Kontakt Player is NOT recommended and will time out after 15 mins. PLEASE MAKE SURE YOU HAVE A FULL VERSION OF NI KONTAKT AS WE CAN'T GIVE REFUNDS FOR SOFTWARE BOUGHT IN ERROR.
For related news items, downloads and more please see the full KVR product page for
Doctor 55

Doctor 55 is a Kontakt version of the Boss DR55 analogue drum machine. It samples the original with great precision at 24-bit. Each of the four original kit pieces (kick, snare, hats and rimshot) are covered, plus an additional "hidden" snare sound that only showed up on the original during programming. This additional snare has been given its own Attack and Decay parameters, hidden on the rear panel, which allow the user to create brushed snare sounds or snares with long decay tails.

Additionally, as usual with Rhythmic Robot drum machines, multiple samples have been taken through the entire travel of the DR55's "Accent" control. These differently-accented samples can then be accessed either by tweaking the "Accent" control on the GUI panel, or by velocity from a MIDI keyboard (or by drawing velocity automation straight into a DAW lane). Accent amounts change the tonality of the kit pieces considerably, and can be dialled in on a per-kit-piece basis, which of course was not possible on the original instrument (where Accent functioned globally).

The Doctor 55 rounds things out with a Tone control, plus effects control over tube saturation, bit-crushing effects, Drive distortion and an output compressor / limiter for "glueing" and pumping effects.