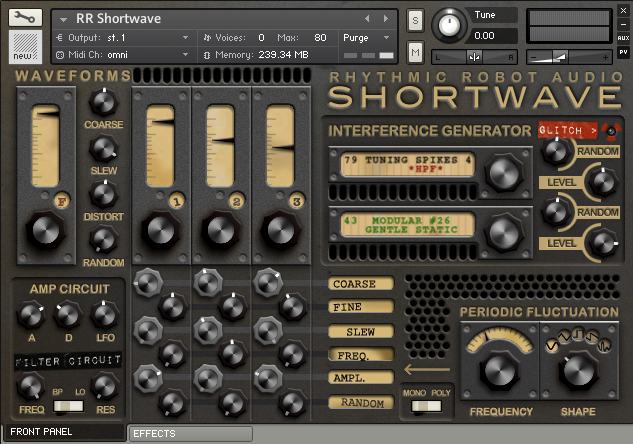 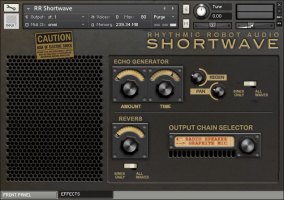 What is it?
SynthAdditive SynthesisAnalogCosmicFM Radio EffectKontakt InstrumentRadioRhythmic RobotSample LibraryShortwaveSynth (Analogue / Subtractive)
Format(s)
Operating System Availability
Audio Demos
Shortwave Demo 1
License & Installation Method
Voucher / Code for redemption on other website
What does this mean?
Important Note
Requires a FULL version of Native Instruments Kontakt version 4.2.3 or higher (all versions of Kontakt 5 supported). Kontakt Player is NOT recommended and will time out after 15 mins or so. PLEASE MAKE SURE YOU HAVE A FULL VERSION OF KONTAKT BEFORE BUYING, AS WE CAN'T GIVE REFUNDS FOR SOFTWARE BOUGHT IN ERROR!
For related news items, downloads and more please see the full KVR product page for
Shortwave

Rhythmic Robot Shortwave is a synthesiser based on the sound of shortwave radio transmissions. It features a crude four-operator sine-wave based additive synth engine harnessed to twin Interference Generators, each of which can access 111 samples of shortwave static, voices, tuning squeals, modulation noises, cyclic tonalities and so on. A rich combination of LFOs and randomisation features makes for complex, evolving soundscapes which hark back to the age of ham radio operators, Cold War numbers stations, attic antennae and "going out on the airwaves".

Shortwave features a Glitch control which instantly randomises the settings, for spontaneous patch creation. This Glitch control is "intelligently musical" in its randomisation, tending to produce musically useful results more often than a pure randomiser would. Shortwave also boasts a series of custom Impulse Responses convolved from genuine radio speakers, plus an old-style graphite microphone, to give patches a compressed, narrow-bandwidth, vintage tonality.

Shortwave requires Kontakt version 4.2.3 or later, including all versions of Kontakt 5, to run.