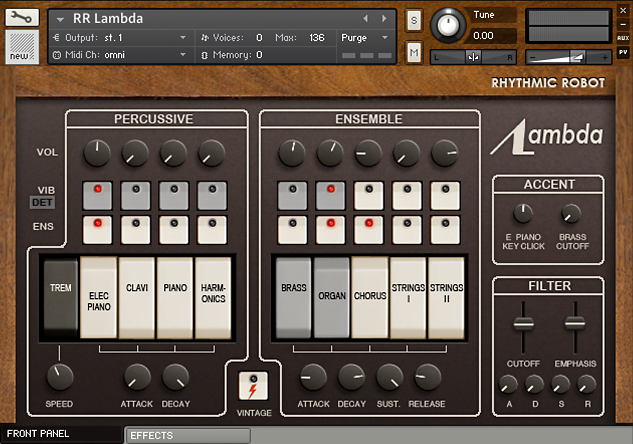 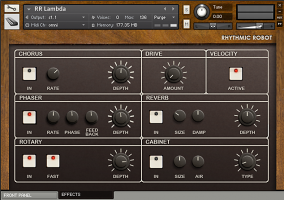 What is it?
SynthAnalogKontakt InstrumentLambdaPolysynthRhythmic RobotSamplesSynth (Analogue / Subtractive)
Format(s)
Operating System Availability
License & Installation Method
Voucher / Code for redemption on other website
What does this mean?
Important Note
Requires a FULL version of Native Instruments Kontakt version 4.2.3 or higher (all versions of Kontakt 5 supported). Kontakt Player is NOT recommended and will time out after 15 mins or so. PLEASE MAKE SURE YOU HAVE A FULL VERSION OF KONTAKT BEFORE BUYING, AS WE CAN'T GIVE REFUNDS FOR SOFTWARE BOUGHT IN ERROR!
For related news items, downloads and more please see the full KVR product page for
Lambda

Rhythmic Robot's Lambda is a meticulous sampled recreation of the Korg Lambda ES50 polysynth. The original Lambda, produced in 1979, was a preset-based synthesiser with genuine polyphony, two banks of preset tabs, and some unusual (and very useful) touches like two filter circuits, one dedicated to the Brass patch; a separate key-click control for the Electric Piano patch; a global filter; and, most striking of all, a stereo "chorus-phase" effect which output on twin jacks. This stereo effect, plus detunable oscillators in the synth section, gave the Lambda a rich, thick analogue sound and made it a coveted classic.

The Rhythmic Robot version builds on the capabilities of the original but allows the user to switch in a "vintage" mode, restricting the software to the hardware's behaviour, for creating authentic patches. The more modern updates to the original include resonance on the global filter circuit, a full ADSR amp envelope, a dedicated AR envelope for the percussive sounds, a battery of additional vintage-style effects, velocity sensitivity and individual level trims for the preset patches – allowing combinations of sound impossible on the original.

Lambda involves over 730 samples taken from a pristine-condition original, totalling 2.4GB (compressed) at 24-bit. Every nuance of the hardware has been carefully captured, including separate samples for the stereo Chorus effect. The result is an eminently playable instrument that can sound identical to a 1979 original, or be used to create entirely new patches which are nevertheless imbued with the vintage style of the real thing. Lambda excels at pads, strings, vintage-sounding EPs and synth brass sounds.

Lambda is available now from Rhythmic Robot at an introductory price of £29.95 (the normal RRP is £34.95). Audio demos, more information and images are all up on the website. It requires Kontakt version 4.2.3 or later to run (including all versions of Kontakt 5). Kontakt Player is not supported.