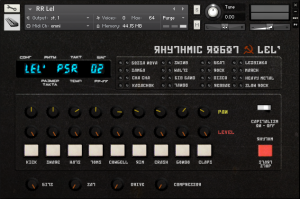 What is it?
Drum MachineDrum KitsDrumsKontakt InstrumentLelLoopsRhythmic RobotRussianSamples
Format(s)
Operating System Availability
License & Installation Method
Voucher / Code for redemption on other website
Tell Me More
Important Note
Requires a FULL version of Native Instruments Kontakt version 4.2.3 or higher (all versions of Kontakt 5 supported). Kontakt Player is NOT recommended and will time out after 15 mins or so. PLEASE MAKE SURE YOU HAVE A FULL VERSION OF KONTAKT BEFORE BUYING, AS WE CAN'T GIVE REFUNDS FOR SOFTWARE BOUGHT IN ERROR!
For related news items, downloads and more please see the full KVR product page for
Lel

LEL is a sampled recreation of the Soviet 8-bit sampled drum machine, the Lel' PSR. The hardware Lel' was programmable but also shipped with 32 on-board preset rhythms which made use of its 12 8-bit samples. It also featured a useful Accent control for introducing variation into programmed and preset rhythms.

Lel recreates both the 12 samples and the 32 preset rhythms, which have been time-sliced to sync automatically to the host DAW's tempo. They can be triggered by MIDI note or from the front panel of the Lel itself. All preset rhythms are freely combinable and can be "stacked" to create new polyrhythms. In addition to pan and level controls for each of the kit pieces, the unit also features an effects block with bit-crushing, saturation, drive distortion and compression modules.

A front-panel switch swaps the graphics between authentic Cyrillic lettering and an English translation.

The Lel sound is 8-bit, with short, gritty samples. It suits a wide variety of modern musical styles, while the preset rhythms include not only staples such as Rock, Reggae and Heavy Metal, but also authentic Russian styles such as Kazachok and Lezginka.

Lel is available now from Rhythmic Robot, priced at £5.95.

Lel is available from Rhythmic Robot and requires Kontakt version 4.2.3 and higher (including Kontakt 5 and above). Not compatible with Kontakt player.