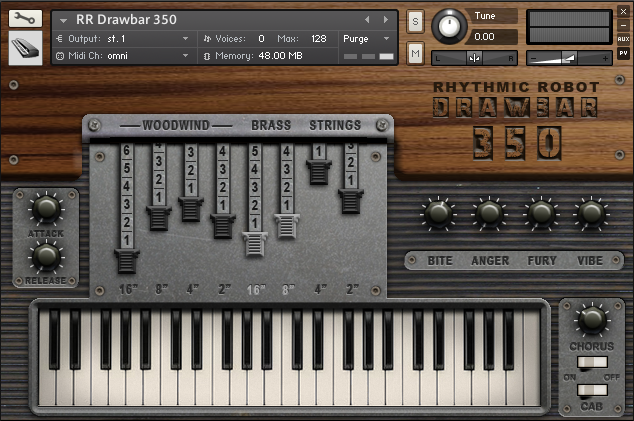 What is it?
Drawbar OrganDrawbar 350DrawBar SynthKontakt InstrumentRhythmic RobotStylophoneTransistor Combo Organ
Format(s)
Operating System Availability
License & Installation Method
Voucher / Code for redemption on other website
What does this mean?
Important Note
Requires a FULL version of Native Instruments Kontakt version 4.2.3 or higher (all versions of Kontakt 5 supported). Kontakt Player is NOT recommended and will time out after 15 mins or so. PLEASE MAKE SURE YOU HAVE A FULL VERSION OF KONTAKT BEFORE BUYING, AS WE CAN'T GIVE REFUNDS FOR SOFTWARE BOUGHT IN ERROR!
For related news items, downloads and more please see the full KVR product page for
Drawbar 350

Drawbar 350 is a transistor drawbar organ whose 8 voices are sampled from the original Dubreq Stylophone 350S - a professional version of the Stylophone with eight onboard voicings covering three sounds (Woodwind, Strings and Brass), plus vibrato, two styli, and a light-sensitive wah-wah control.

While the original Stylophone 350S employed toggle-switches to switch its tones in or out, the Rhythmic Robot Drawbar 350 replaces these with 12-stage drawbars, allowing a much more sophisticated tonal palette to be created by blending the raw tones. There is also control over envelope attack and release, and a batch of processing tailored to the aggressive transistor character of the raw samples. These include Anger (a tube drive), Fury (a Skreamer distortion pedal), Vibe (for vibrato) and Bite (which rolls the top end off if you want to tame things). Amp Cab simulation rounds out the effects and can help the Drawbar 350 to sit in a mix, giving it a convincing "live" sound.

This is a unique instrument whose tonal fingerprint is defined by the analogue transistor quality of the original 350S. Unprocessed it can sound very rough and raw, but the user interface incorporates a great deal of control to tame that sound. From punk organs to pads, aggressive leads to distant textures, this is a thoroughly unusual addition to anyone's sonic arsenal.