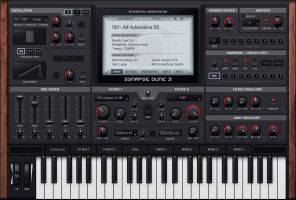 A unique feature of DUNE 3 is the ability to synthesize a very high number of oscillator voices, regardless of the synthesis model in use. At full polyphony, up to 8320 oscillators can be active simultaneously.

DUNE 2 and DUNE 3 are not compatible with DUNE 1. All versions of DUNE run just fine in parallel, however.

Right from the bat, let me say this: Dune 3 is my favorite VSTi.

Dune 3 is the one I'll reach first, and often last as well, VITAL often coming as second. Dune is not the deepest of all those (Zebra arguably still is), and its user interface isn't the best either (VITAL has). But it still has a rich feature set, and its UI is still good and rather simple to understand for someone who already knows software synths. Plus its skins look great.

But what makes it really stand apart is its sound. It just sounds better than all the other synths, and yes that includes the legendary Diva. I don't know what Synapse Audio's secret sauce is, but the oscillators sound great, the 24 filters sound great and the myriad of FX sound great. Including the reverbs, which are often not so good in synths.

The latest release has added a patch generation feature based on a genetic algorithm: choose 2 or more patches and Dune 3 will combine them to generate as many new patches as you want. The result is often surprising. After playing with it, I think every synth should include a patch generator.

Is Dune 3 perfect ? No of course. The browser, right now only has a few categories. You can add new categories but a patch cannot belong to more than one category (for instance a gated pad has to belong to the gated category or the pad category). This improvement alone and the possibility to search several categories would be the functional equivalent of a search by keywords.

Also I wish Dune 3 allowed to input real time audio from the DAW instead of an oscillator. Finally, it lacks a granulator, but I guess that will be added to Dune 4 ?

Apart from that, there is really not much downsides to this synth. Due to the awesome sound combined to the super easy UI and the fact it's light on the CPU, Dune 3 is the definition of a workhorse.

* That's way more software synths than I need. But I simply never use Sylenth1 any more. I also own Dune 2 but I uninstalled it because Dune 3 is equal or superior in pretty much every way, and it comes with all the Dune 2 patches. BTW Dune 3 can read Dune 2 patches, contrarily to what is said in another review.

Amazing and flexible sounding VST synth, one of the best ones out there, if you are thinking of getting it, no need, just get it!
The range of excellent sounds is incredible, from the lush pads to aggressive lead sounds!
I would say this is one of those synths that can be truly used to make any type of music with an electronic element, very rich and diverse sound quality.
The addition of the new preset browser and the possibility to generate sounds from other presets just adds another dimension.

Authors decided to break backward patch compatibility, which is not good move. People often buy synth because there are presets pack they like and split between old and new Dune will discourage them. Why buy synth if next version will be incompatible and your patches useless? You can use old version but it will probably stop working after you upgrade to Windows 11.

Sound is very good too, audio rate modulation is supported. This synth can easily become your everyday work horse. We have cheap and simple synths and then premium 200 USD category. Buy 200 USD synth only if you can put it into every day use.

For life playing use, I don't remember seeing max glide distance setting and multi segment key tracking curve. Both are important for live use. Key tracking curve is hard to give up after you started to use it. Dune have velocity curve, which is still not very common.

Synth authors usually resist to implement these features because they do not play live. They often have all infrastructure needed in place but no will to finish features like routing different MIDI channel to selected layer. That's why Omni sphere is so much used for live playing- Team leader works in industry for a long time and understand what features are most needed. For example UVI Falcon is more like audio engineering workstation, it will attract much less users because it's more work then fun. Most people simply want just to play.

Dune is not very popular in the community, so less 3rd party patches are available. Splitting between incompatible versions didn't helped either. It's not a big problem, there are factory presets from various genres - you can tweak them.

I wonder when synths will start to have switchable DAC emulation as standard. We can take a look at KORG Triton VST and difference between digital out and Korg Studio mode DAC is quite noticeable.

I am honestly speechless. DUNE has made my music production incredibly rewarding, thanks to a modern, easy to use graphical user interface and logical signal flow. The fact that with one instance of DUNE you can have up to 8 voices/layers and each one has multiple dedicated oscillators, filters and much more is unbelievable.

A true high quality product developed by industry experts. Efficient and easy to use, no need to install activation software, simply install the DEMO version and start making music. This is how all software should be.

I have designed a Soundbank for DUNE 3 containing many presets, please see: