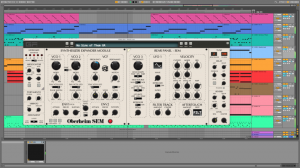 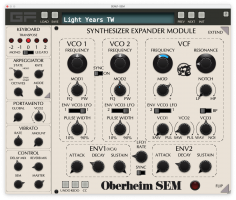 The Oberheim SEM – A Simple Monophonic Synth With A Huge Sound

When Tom Oberheim created the first Oberheim Synthesizer Expander Module (model SEM-1) in 1974, he had one goal - to make a synth that sounded great, whilst being extremely simple to use. In the decades since the release of this iconic synth, it's been used by countless legendary musicians, making the SEM one of the most revered synthesizers of all time.

As well as painstakingly recreating the huge, unmistakable sound of the SEM, the GForce Oberheim SEM also recreates the ethos of the original - a simple monophonic synth that allows you to shape incredible sounds in an instant. And with Tom Oberheim's seal of approval, you can be confident in its authenticity. Add to this more than 400+ categorised presets, and inspiration is just moments away.

Made In Collaboration With Oberheim

We first worked with Tom Oberheim and Marcus Ryle (an Oberheim engineer during the 80s) when creating the GForce Oberheim OB-E v2. During this time, Tom and Marcus revealed that they felt there were no software emulations of the SEM that accurately recreated the sound and the ethos of the original monophonic SEM. We decided to change that, and under the close guidance of Tom and Marcus, we developed the GForce Oberheim SEM to ensure an experience that is truly authentic to the original instrument.

Centered around two VCOs with Pulse and Sawtooth waveforms, two ADS Envelope Generators, one LFO, and a magical, legendary Multi-Mode Filter, the SEM sound is more than the sum of its parts. In the GForce Oberheim SEM, every section of the synth has been painstakingly emulated to ensure sonic authenticity. We've even modelled the authentic analog inaccuracies of the original SEM, blurring the lines between analog character and digital precision. All this makes the GForce Oberheim SEM the most authentic emulation of the SEM sound available.

The beauty of the SEM truly lies in its simplicity. With a refined design and feature set, you can easily create warm basses, soaring leads and sweeping arps in an instant. This allows you to spend less time shaping your sounds, and more time making music.

Enhanced Where It Matters

While staying true to the original SEM, we also added a number of enhancements to make the GForce Oberheim SEM even more useful for modern music production. Alongside a new VCO3, which doubles as an audio rate LFO for additional modulation and FM possibilities, the SEM now has tempo-syncable LFOs and a host of performance controls via velocity and aftertouch. We've also integrated a fun, fast arpeggiator & sequencer, and added a stereo delay and a beautifully lush reverb to sonically compliment your sounds.

Finally, we've included 400+ factory presets designed by Dave Spiers, Graeme Rawson and Tom Wolfe, each created to demonstrate the incredible sonic character of the SEM. Every preset has been tagged, categorised and is quickly accessible from the preset browser. The SEM even integrates with the GForce Oberheim OB-E, allowing you to load your SEM presets in either device. This enables you to quickly sketch out your sounds in the SEM, and then make them polyphonic in an instant.

Having Arturia's V collection and subsequent SEMV2, OP-XA V and Matrix 12V, BrainWorx bx_oberhausen, discoDSP's OB-Xd, Sonic Projects OPX-Pro II, Cherry Audio Eight Voice I didn't really think I needed another OB plugin, but it's Gforce and having owned all there earlier pre v2 Synths and loving them (impOSCar especially) I downloaded the demo ... two days later had to buy it .

Sounds fantastic, easy to use, The built in Reverb sounds about as good as the Novation Summit's as icing on the cake .

Only Con : I'm sure I'll have to buy OB-E now which is not so cheap and had avoided until this point ...trying it's demo out now, but is worth it's weight in hype too .

In My Cart!Oberheim - The Bundle
Oberheim by GForce Software$215.00