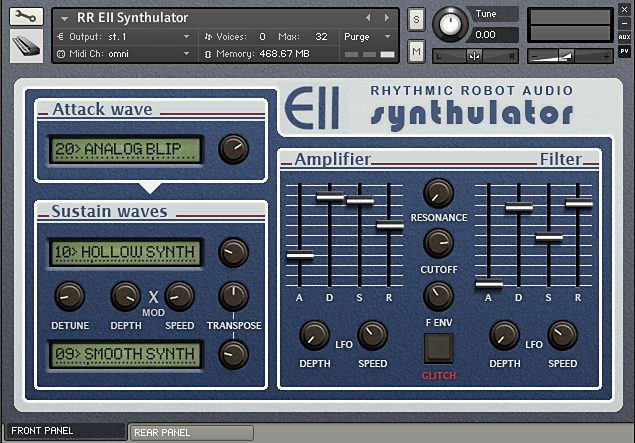 What is it?
Synth (Analogue / Subtractive)AnalogKontakt InstrumentRhythmic RobotSample LibrarySynthulatorVintageVintage SamplerVintage Sampler EmulatorVintage SynthVintage Synthesizer
Format(s)
Operating System Availability
License & Installation Method
Voucher / Code for redemption on other website
Tell Me More
Important Note
Requires a FULL version of Native Instruments Kontakt version 4.2.3 or higher (all versions of Kontakt 5 supported). Kontakt Player is NOT recommended and will time out after 15 mins or so. PLEASE MAKE SURE YOU HAVE A FULL VERSION OF KONTAKT BEFORE BUYING, AS WE CAN'T GIVE REFUNDS FOR SOFTWARE BOUGHT IN ERROR!
For related news items, downloads and more please see the full KVR product page for
Synthulator

Synthulator derives its waveforms from the sounds of a classic Emulator II sampler, but puts them into a framework that harks back to early Sample & Synthesis machines like Roland's D50. The Synthulator engine grafts short Attack samples (guitar plucks, string bows, flute chiffs, synth blips etc) onto twin Sustain waves, allowing the user to create complex evolving sounds with a minimum of fuss. The two Sustain waves include both Emulator II-derived acoustic tones (for example, strings, brass, woodwind) and a wide variety of synthesiser patches (including a full complement of synth staples like sawtooth, square, sine, triangle, pulse etc).

Synthulator incorporates some extremely useful performance controls, such as allowing incoming MIDI velocity to affect the Attack and Sustain waves differently, and allowing Sustains to be inverted (to allow crossfading with velocity). There are also some neat modulation abilities, including X-Mod, which slowly crossfades between the two Sustain waves to give subtle or extreme movement to the sound – this technique can create tonalities that are reminiscent of PPG-style machines.

Synthulator's tone palette is definitely digital in focus, with every onboard wave stamped with the Emulator's 12-bit convertors and 8-bit sample grain. This makes for a synthesiser with extensive sonic capabilities that nevertheless sounds like an Emulator: ideal for "new sounds of the 80s", unusual synth patches, and vintage-flavoured tones. The onboard Glitch button musically randomises the control set for instant new patches:

I'll start off by saying that I wrote a review on the Rhythmic Robot site jus now, so I'll just add that along with some extraness ;-)

I picked this up during their summer sale right now & The Professor & Mongo are pretty good at having their products available for cheap prices and on sale sometimes. This is by far 1 of my best purchases I have ever made for a Kontakt library. it's just what I needed. A retro sounding sound synth library with real world sounds but operates like a synth...however easy to control.

What I like best about Synthulator is that as complex as this sounds it's so easy to work with. Even just using the basic saw, sine, tri, & pulse sustain waves gives you something with character due to how well RR sampled it. Synthulator definitely has girt... but not sloppy grit. Soothing exfoliating grit if you will. Those reverbs play well in this instruments and it gives everything a nice smooth coating. I think what makes this synth so dope is the Glitch function. It's random but like a musically randomness. You can come up with some great ideas just by hitting the button & doing further tweaking. Again... this is not super complex to work your head around. It just feels right. Add a lil tape compression effect from Kontakt & maybe also for some craziness you could use Replika XT with this and you have yourself an 8 bit synth with lots of depth. My ONLY ONLY ONLY ONLY criticism of this that this scream for a mono poly legato mode to be implemented. I come up with nice lead sounds with this and to have that much more of control would make this perfect... and I don't believe in perfect LOL.