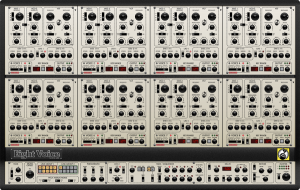 I am a huge fan of the SEM sound, so I really wanted to like this, but I find this instrument is way too hard to work with and it doesn't sound as good as some of the other SEM-like emulations around. My advice would be to wait until bx_oberhausen is on sale and buy that instead.

I found the Eight Voice to have tremendous volume and terrific reverberating vibrant sounds like that of a real Oberheim Eight Voice Synthesizer. I think that the Eight Voice suitable for all kinds of music styles.

I love it, it needs more presets though and if it used less CPU it would be better, more like the dco, but it's less trouble than the poly; so I count My blessings.

The main drawback of this software is its CPU requirements. I have a i7 3770 and it "cracks" on Reaper. The strange thing is that it works quite well in Reason. I guess it's a problem with multi-core handling.

Other than that, I would like to send a different MIDI sequence to each SEM separately but its is not possible. What is possible is to split the note range eigth times but you ends up with transposition problems.

The sound is quite good and the features need some time to explore (what I didn't really achieve at this time).

I like to run a little sequence on some SEMs and play with the others.

Actually it's not a "must have" but for the price it's fun to use. I could not use it in a song due to CPU requirements without freezing tracks.

Infinitely valuable. I was lost from the moment I opened it and started playing, and for a very reasonable price.