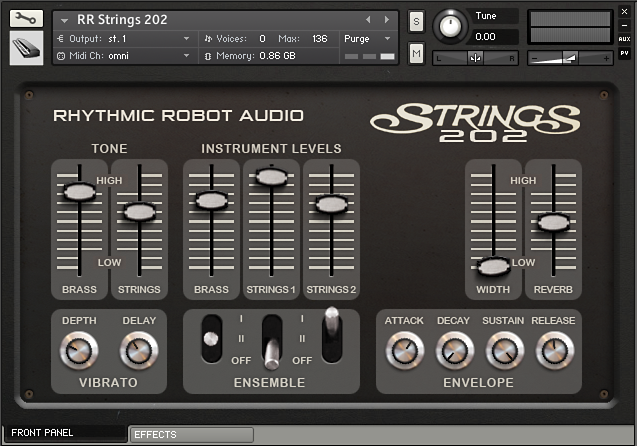 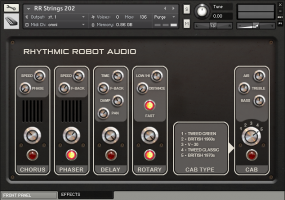 What is it?
String Ensemble SynthAnalogKontakt InstrumentLogan String MelodyLogan String Melody IIRhythmic RobotSolinaString EnsembleString InstrumentString SynthString SynthesizerStringsStrings 202VintageVintage Keys
Format(s)
Operating System Availability
Audio Demos
Strings 202 DemoStrings 202 Disco Demo
License & Installation Method
Voucher / Code for redemption on other website
What does this mean?
Important Note
Requires a FULL version of Native Instruments Kontakt version 4.2.3 or higher (all versions of Kontakt 5 supported). Kontakt Player is NOT recommended and will time out after 15 mins or so. PLEASE MAKE SURE YOU HAVE A FULL VERSION OF KONTAKT BEFORE BUYING, AS WE CAN'T GIVE REFUNDS FOR SOFTWARE BOUGHT IN ERROR!
For related news items, downloads and more please see the full KVR product page for
Strings 202

Roland's RS202 hales from 1976, and was something of a landmark product for Roland. It featured the first outing of the classic Ensemble / Chorus effect that would later grace the Juno and Jupiter lines, and which contributed in large part to the warmth and movement of Roland's big analogue machines.

The RS202 had no ambition to be a huge polysynth, though. It was a string machine, plain and simple, albeit with a useful Brass section incorporated alongside the two String footages. It also had tone controls and two flavours of the wonderful Ensemble to liven things up – position II gives a lush chorus, while position I adds some lively modulation to create the sound that captured the imagination of a generation. Stepping neatly into the Disco scene, the RS202 pretty much defined the sound of 'disco strings' – its character being sweet and soaring in the top octaves, but interestingly gritty and raw in the midrange. (It's quite a contrast to Logan and Godwin in this sense: a much more rough-round-the-edges tonality until you get to the high notes.)

The Vibrato control has a pre-delay allowing more natural-sounding swells of vibrato, and simple envelope sculpting came courtesy of an Attack Slow / Fast switch and a continuously-variable Release control. Rather nicely, the two Strings patches aren't just octave clones of each other: the upper violin/viola patch is noticeably thinner, while the lower cello/bass patch is thicker and fuzzier, so mixing them yields a useful spread of sounds. All in all, the RS202 packed quite a punch, and Disco enthusiasts in particular took to it in droves.

Our version sticks pretty close to the original in features, letting the simplicity of Roland's design shine through. We've added a stereo-ising Width control, a full ADSR envelope, and a block of useful effects around the back – covering a modern Chorus to complement the vintage Ensemble/Chorus effect, a Phaser, an Echo, a Rotary speaker and a modelled Amp Cab selection. (The Amp Cab simulator really changes the tone of the sound, and is great for getting a more squashed, frequency-limited version of the sound.)

Strings 202 of course sounds absolutely fantastic in its natural setting – soaring above Disco beats and stabbing out funky riffs with its flared jeans on – but it's also great for bedding down any track that needs a string pad that tends towards 'gritty and textured' rather than 'sweet and smooth'. There's a bit of a prog-rock-y tone to it too, like it wouldn't be out of place in Watcher of the Skies. We really like it :-)