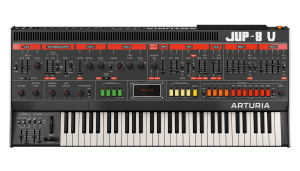 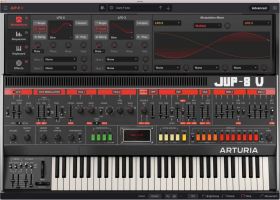 Jupiter-8V is a software recreation of Roland's famous Jupiter-8 which was in production from 1981 to 1984.

Based on the latest version of TAE - Arturia's proprietary technology for analog emulation - the Jupiter-8V offers a new generation of features: The integration of effects within the synthesis line allows for drastic modifications of the original sound; with Galaxy, a graphical tool made to program two LFOs at the same time, you get a unique and innovative source of modulation; and with the modulation sequencer you can create new evolving sounds extremely easily.

The Jupiter-8V includes more than 400 presets made by a selection of top musicians. Fully compatible with the main protocols and systems in the industry, it can be used as stand-alone software or as a virtual instrument.

6 2
The 80's was the epitome of excess in every way. Pop music of the 80's was no exception. With the advent of MIDI in late 1983, the norm became how many sounds can be stacked together and since the best sequencers back then ran at a whopping 120ppq, everything had that sterile mechanical sound. Just listen to any Lisa Lisa and the Cult Jam song to see what I'm talking about.

One of the mainstays of synth pop bands of the day was the Jupiter-8 and later, it successor, the Super Jupiter. It's ability to generate cutting digital sounds were all but synonymous with the music of the day. They were responsible for a lot of those crystalline bell sounds you hear a lot, as well as those thin strings and some pop synth basses.

Arturia does a good job with this VST version and even tosses in a few extra features the original JV-8 never had. The one major drawback of this particular VST though is that it is a resource hog! I sometimes find myself playing with bands that cover 80's music and have the need for the sounds available in this plugin. But when I use this one, I have to literally plan out my VST rack more efficiently because this VST, for whatever reason, just sucks CPU power like crazy. Hard to figure this since no other Arturia plugin I have is nearly as resource intensive as this particular one.

As with all Arturia's other TAE based synths, this one is pretty darned accurate and has it's place whether you play in cover bands that touch on 80's music, or you are trying to create a retro type track with an authentic sound. The step sequencer is nice and can be routed to a variety of modulations rather than notes so you can create some complex textures with movement in them based on time. Very cool!

IMO the 8 always lacked the warmth of other contemporary synths of the day. It was a little too pristine. So if you want fat warm sounds, you could get a few out of this synth, but it's no minimoog or Massive.

Overall, unless you are doing 80's or retro 80's music, this VST would be more of a novelty than a necessity. That's not to say it's a bad plugin. It's just more niche than others. Since I got it as part of the V2 Collection, I have it and will make use of it. I hope that as updates become available, Arturia will be able to do something about the amount of resources it gobbles up.Read Review