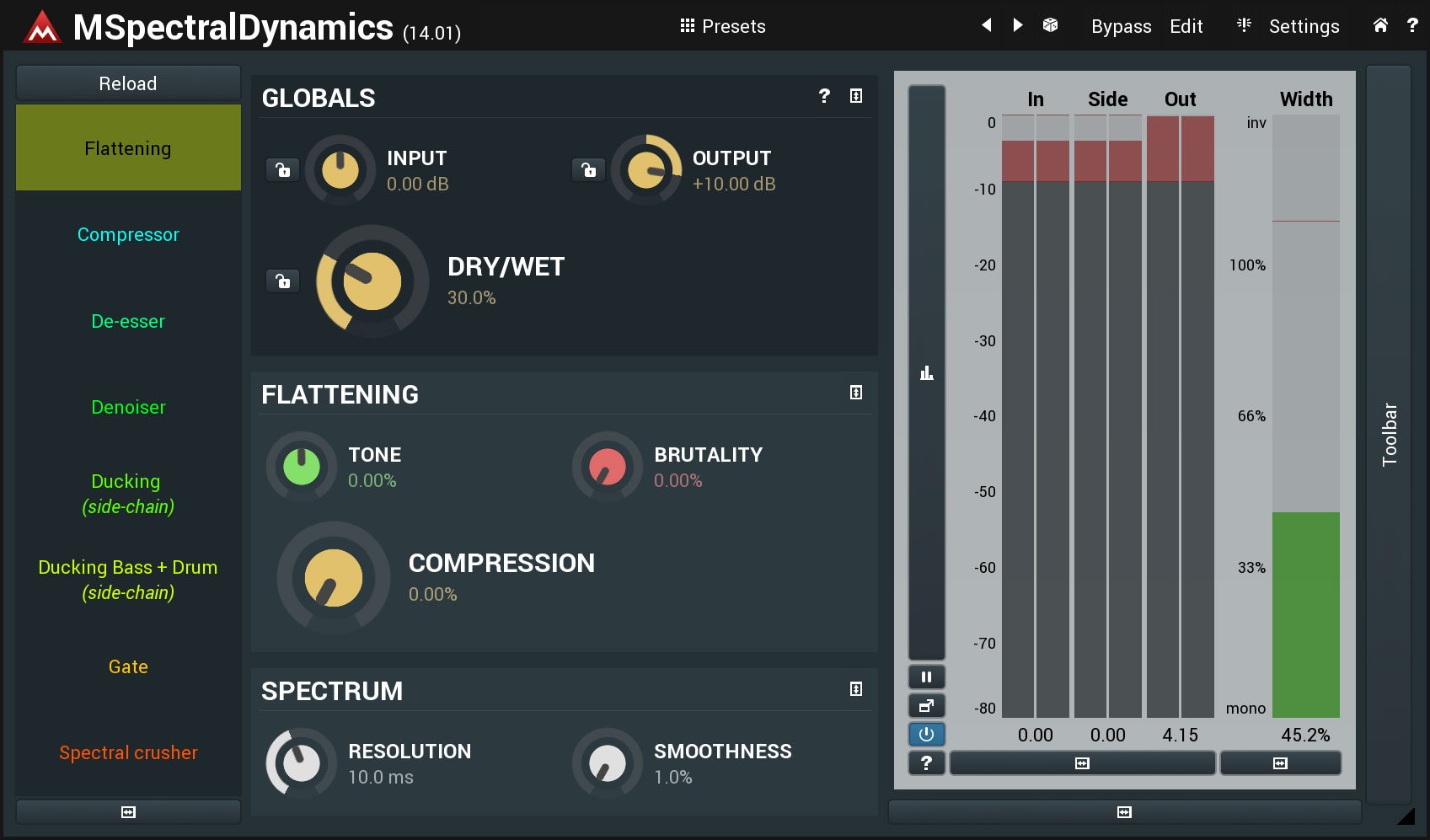 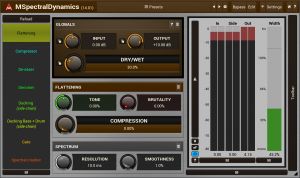 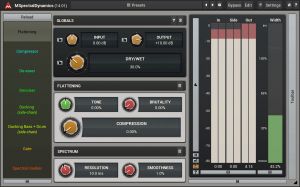 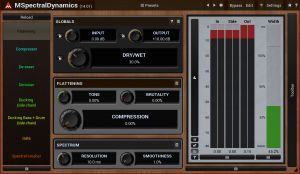 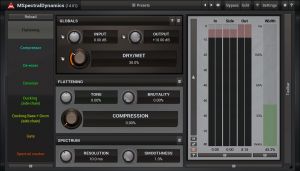 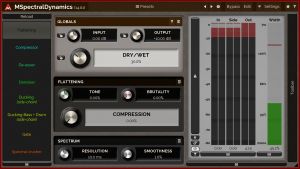 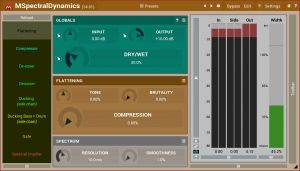 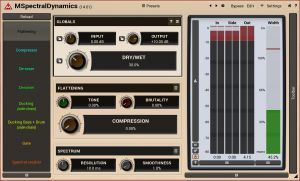 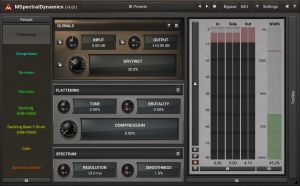 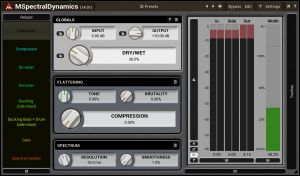 MSpectralDynamics can do many things, but mostly it serves as a modern hi-tech replacement for multiband compressors and loudness maximizers. However with features such as custom processing shape it can provide a wide range of effects. Additionally it provides a free-form linear phase equalizer with range from -80dB to 0dB, which you can use to fix issues with your recording.

Unlike Multiband compressors, MSpectralDynamics does not have any bands but works with the entire spectrum instead. It approximates energy located in each frequency and applies the dynamics to it separately. You can perform spectral compression to balance the spectral energy and increase loudness with minimal amount of artifacts. You can apply spectral expansion to excite frequencies and increase sound clarity.

I noodled around with this thing for two weeks and admittedly didn't care for it very much at first. Like other of the more complex Melda plugins, this one is seriously feature heavy and has a bit of a learning curve. Using it in what I considered to be a "traditional" way, I just didn't feel like I got it right. Then, I discovered some other astoundingly good uses.

As other reviewers mention, this thing can de-ess like nobody's business. I mean, we're talking the most controllable and customizable de-esser that I have ever found. The big secret in all of this is in MSpectralDynamics fully customizable threshold. If you don't know, "s" sounds aren't just one thing. There are at least three components to most performers' sibilance that can be described as high, medium, and low in terms of their frequency content. Whistles are a different beast altogether. Only a few de-essers acknowledge this reality and often have only one frequency, range, or threshold to adjust. In MSD, in conjunction with the built in analyzer, you can be ultra specific about shape of the threshold you draw or customize, giving you total control over the various parts of the sibilants in the material, no matter where they lie in the spectrum.

Also, the way this thing ducks, mentioned by another reviewer, is a thing of absolute beauty. Using this in the sidechain to control the duckee carves a perfect frequency and volume adjustment based on the ducker. Wow! It can make a voice work with a music or sound effects bed like nothing you have ever experienced.

Another favorite use is noise reduction. Easing background noise in a dialogue track is sometimes dicey. MSD can learn a noise signature and subtract to any degree needed.

Spectral gate with custom threshold? Yep, that too.

Yes, it'll take you some time to figure out. Yes, you might get a little frustrated until you figure it out. Once you do, though, this thing is irreplaceable.

I'm hoping this review serves valuable to anyone contemplating buying this plugin.

The main use I have for this plugin, and what I discovered this plugin does better than any other compressor plugin I have ever used, is for ducking frequencies. In other words, using it as a side-chain compressor. As of now, Dec 2017, there isn't anything like this except for the stand-alone program called SpectraLayers with a built-in function called Spectral Casting. The downside with Spectral Casting is that it's not real time...so that is a huge downfall. With MSpectralDynamics (MSD for short) you have surgical control of your sound, in real-time, whether or not you're using it in side-chain; however, IMHO its side-chain capability is its most powerful feature.

The price tag is a hefty one though, so it may not be for the amateur or music hobbyist unless you can budget this kind of price but I can now say, after having used it on several mixes now, that it IS my definitive choice for ducking frequencies. NOTHING ELSE EVEN COMES CLOSE. I would go so far to say that if you're a professional mixing or mastering engineer, you SHOULD have this in your toolbox.

You know that pumping effect you get from side-chaining the kick into the bass...well...you can actually eliminate that artifact with MSD. If you still want that pumping effect, you can dial it in if you're producing Techno but when you want a clean and natural fusion of competing frequencies, this is the definitive choice to get that result.

It has MS mode, and every variation of the combination of manipulating the channels that make up the stereo field. You get both meter and graphical analysis of the audio input and resulting audio output. There is just too much to mention what this plugin does both functionally and creatively that I would suggest downloading it, READ THE MANUAL, then test it rigorously on a mix or two, especially in side-chain for ducking. Then test out the other purposes for this plugin...including its most obvious mode...compressor. Lol.

To wrap things up, although this was a biased review for its purpose most impressive to me, I know it will be an essential tool in every pro studio. A great complement to this plugin is Melda's MMultiAnalyzer for seeing competing frequencies on the same analyzer. Ozone 8 also let's you see competing frequencies, but only two at a time...Melda has no limit AFAIK.

MSpectralDynamics by MeldaProduction is an intense processing plugin that has boundless capabilities. It can be used as a compressor, expander-maximizer, gate, or EQ, but also provides creative flexibility to be used in many other ways. The interface is intuitive and easy to get started via the main page, which features four big knobs, a column of parameters, and an easy-to-read meter. The edit page has advanced features that allow for complete control over the type, shape, and degree of processing.

I extensively demoed MSD for noise removal, repairing, and mastering. Once I realized that I was working with thousands of frequencies across an entire spectrum, (not on specific bands) possibilities opened up. .. I was able to isolate frequencies, draw frequencies, or make global sonic changes across the spectrum. De-essing is a dream! Instead of lowering the volume sibilant constants on a vocal track, you can spectrally compress the high points of the troubling frequency range that contained the vocal hisses. The result was a much cleaner and easier to listen to vocal track, free of lisps. Of course, other specific sounds can be reduced or enhanced, i.e., kick drum, hi hats, or even the entire vocals of a mix (more tricky, of course). Noise reduction, in general, is a strong point of this plugin.

MSpectralDynamics can do many, many things —it's an "all-in-one solution." However, there are a few dedicated processing plugins in Melda's bundle that can do specific tasks a little easier. Still, MSD is a powerful, addictive plugin that inspires creative approaches to dynamic processing. Considering all it does, the price is good, and if you are wise enough to buy the bundle — it's a steal! I give MSpectralDynamics a big, fat all-in-one thumb up.