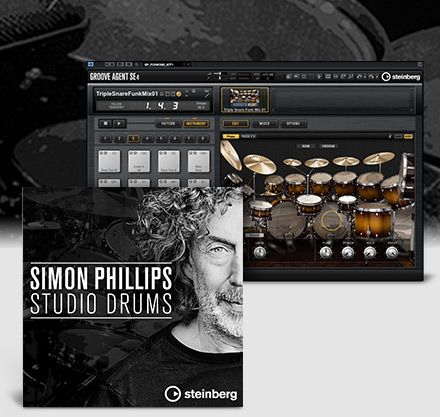 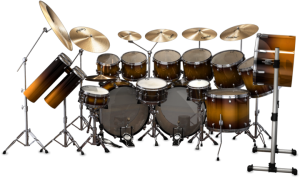 This premium VST drum library captures Phillips' concept of drum sound that is based on 40 years of experience in playing, recording and mixing music with some of the most talented artists in music history such as Frank Zappa, Mick Jagger and Jeff Beck.

Simon Phillips' established recording techniques and his one-of-a-kind playing style emerge in the studio drum kit that comes with over 27 kit pieces, including two kick drums, six snares, eight toms and four octobans, over 6 GB of samples and 14 groove Styles — played and recorded one-by-one by the legend himself.

Expand your Groove Agent library with Simon Phillips Studio Drums and get the sound and feel of one of the most esteemed and accomplished drummers, artists and studio engineers worldwide.

Simon Phillips has developed his very own concept of playing, recording and mixing drums in over 40 years as a professional. This not only provided him with the expected experience as a drummer but also turned him into an expert studio engineer while learning and adapting many of his recording techniques from the hundreds of industry legend engineers and musicians with whom he shared the studio. Combining the technical savvy that he gained over the years with his passion and incomparable understanding of drums has earned Simon Phillips and his studio both recognition and an international reputation.

For the studio drums in Groove Agent 4 Simon recorded his customized drum set in his very own Phantom Recordings Studios in Los Angeles with the same setup, microphones and techniques (such as the signature paint can in the kick drum) that he would use for regular recording sessions. His drum set includes double kick drums, a set of three snare drums, eight toms including a massive gong drum and a 14" x 18" floor tom, a set of four octabans, six cymbals and hihat. The main snare drum can be played with or without wire, and an alternate metal snare is available for exchange.

To get the typical Simon Phillips sound, two additional options have been added to the feature set of the Acoustic Agent in Groove Agent. The pitch of the room and the overhead microphone channels can be adjusted for each instrument group, like kick, snare, toms and octobans, in order to achieve powerful deep kick drums and shattering snares. Secondly, 32 additional trigger samples for the kick and snare each can be mixed to the acoustic signal to create extraordinary drum sounds for fusion, electronic and funk projects. Simon's long-time friend and business partner, Chris Marr, produced, recorded, mixed and edited the Simon Phillips Studio Drums in collaboration with Steinberg.

The following drum set was recorded for the drum library: