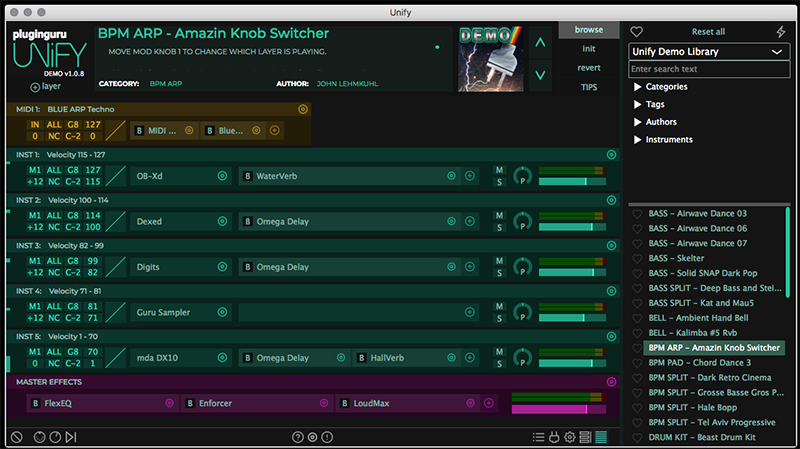 Unify is a Flexible plug-in that allows you to work with your MIDI Effects, Instruments and audio effects in a creative environment (standalone, VST, VST3 and Audio Unit versions of Unify are included). Unify comes with 436 Patches that play anything from grand pianos to rhythmic pulsing pads and more thanks to the side-car of plug-ins that are included with Unify. We received permission to include OB-Xd, PG-8X, Dexed, Digits and many other plug-ins plus our own built in sample player to give Unify a huge spectrum of sounds before you scan your plug-ins.

Once you scan your plug-ins you then have access to loading ANY of your VST, VST3 or Audio Unit (Mac only) plug-ins and layer unlimited numbers of them to create anything from splits to huge layers. It is truly a inspiring place to let all of your plug-ins interact together.

Unify version 1.2 adds ComboBox, a new Multi-Effect PlugIn along with updates to many plugins previously included in Unify, offering its users the ability to create sounds with Wavesequencing, Vocoding and more. In addition, ResonantDSP.com's Swanky Amp Guitar Amp Simulator effect has been included.