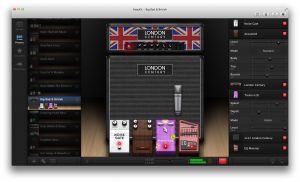 Agile Partners has launched AmpKit on the Mac App Store. Connect a guitar to your Mac using a guitar interface, and AmpKit transforms your computer into a powerful amp, effects and recording studio. AmpKit has previously been available for iPhone and iPad users.

AmpKit Mac includes all of AmpKit's amps and effects in its $49.99 price (US Mac App Store): 22 amps with 38 separate amp channels, 28 pedals, 28 cabinets and 8 mics. "We wanted AmpKit to be an easy purchase decision for Mac guitarists, whether they're GarageBand users seeking more in-depth modeling options, or pro users who'd rather work in a truly native Mac app," said Agile's Jack Ivers.

AmpKit is offered on the Mac App Store, which Berry feels is a significant benefit to users. "The Mac App Store makes for an incredibly simple and secure purchasing, installation, and upgrade experience," says Berry. "It makes life so much simpler--no frustrating registration and activation process, no hassles with update managers, no intrusive anti-piracy mechanisms like USB keys."

AmpKit gear and setups are fully compatible between Mac and iOS versions. Users with a Mac as well as an iPhone or iPad can easily use the same setup on all devices, thanks to AmpKit's setup sharing feature. AmpKit Mac includes 137 built-in presets that range from smooth cleans and earthy acoustics to bone-crushing high-gain metal.

A free trial version of the app is available for download at ampkitmac.com.