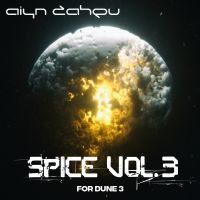 Spice Vol.3 includes 122 presets and rounds out the Spice Series. This volume branches off from the previous two with its emphasis on cinematic and re-interpreted retro sounds. With DUNE 3's engine featuring analog emulation, wavetables and FM, it covers a diverse palette of sounds.

The bank features 18 basses, 14 chord, FX and drum patches, 39 Drone and Pad sounds, and 30 Arps and Sequences. Rounding off the bank are a further 21 Lead, pluck and keyboard patches. The full compliment of MIDI also accompanies the bank, allowing you to recreate parts from the demo which you can drop into your songs as is, or use as a spring board for new ideas.

As with all AZS sound banks effects were used judiciously, with some sounds having a sprinkling to add to the sonic imprint, and others using them as essential components of the sound. The end goal is that you will be able to drop these sounds in your project and use them out of the box, or as a great starting point for your own mix.

Find DUNE 3 in the KVR Marketplace