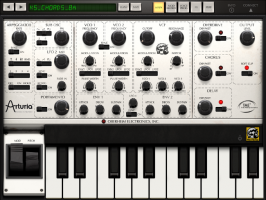 Arturia has announced the release of iSEM, its second subtractive synthesizer recreation for Apple's iPad.

iSEM is a recreation of the classic 1974 Oberheim SEM (Synthesizer Expander Module), one of the world's first self-contained synthesizer modules and the first to bear the "Oberheim Electronics" name. The Oberheim SEM was made famous by artists and bands such as Lyle Mays, Jan Hammer, Joseph Zawinul, Supertramp, 808 State, Vince Clarke and Depeche Mode.

Based on the TAE technology found in Arturia's Oberheim SEM V software, iSEM brings back the sound and special characteristics of this iconic synth in an sonically accurate and expanded touch-based emulation.

iSEM is capable of producing a wide range of warm analog sounds. Reproducing the unique SEM architecture, with its oscillator sync, characteristic filter shape and specific envelope response, the iSEM is able to generate the fat basses that have made the Oberheim brand so popular. Thanks to its simple and clever PW and pitch modulations, it is also very easy to produce moving and lively leads. Its 12 dB/oct multimode filter can instantly tailor your sound to fat, crisp, or spectral textures with access to all the nuances in between.

iSEM comes with over 500 sounds that you can browse through and play. You can also easily create your own sounds with the easy to use interface. Play iSEM's numerous sounds from the iPad keyboard or control iSEM from a MIDI keyboard or other app via CoreMIDI and integrate it into your studio or live performance. If you are an owner of of the Arturia SEM V software on your Mac or PC, you can even import and export sounds between your laptop or desktop SEM V and iSEM.