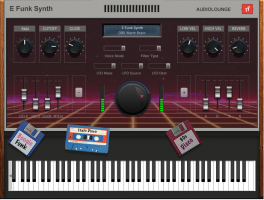 Audiolounge Software has announced the release of E Funk Synth, a virtual instrument for macOS and Windows.