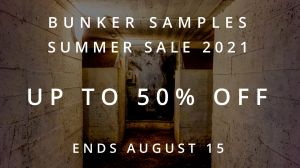 Bunker Samples has announced a summer sale. All individual products are 35% off and the Adventure Bundle is 40% off until August 15th, 2021. Also available is the time-limited Summer Bundle containing the complete Bunker Samples catalogue at 50% off. This bundle is only available during the sale.