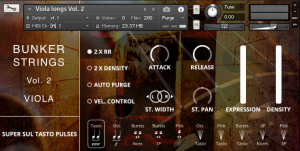 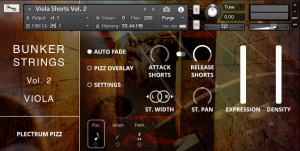 The defining feature is the density slider which lets the user control the density of the texture by changing section size on the fly, morphing seamlessly between 3 to 9 players.

The long articulations are designed to never be static and keep the listener engaged, even if you are just holding a long note. They range from the beautiful and whisper quiet Super Sul Tasto Pulses to the sharp and angular Tremolo Bursts Sul Pont.

The shorts in the library are all played with guitar plectrums, a technique inspired by Jonny Greenwood's score for There Will Be Blood. The Plectrum Pizzicatos have a lot more bite than normal pizzicatos and the non-tonal strums are good for adding rhythmic energy and drive.

Bunker Strings Vol. 2 requires the full version of Kontakt 5.6.6 and is available now with introductory pricing of $49 until September 30th, 2021. Normal full price will be $79.

FEATURED
50% Off
AX73Synth (Analogue / Subtractive)
by Martinic  $59.50
Add A Review My KVR
Was $119.00; Save $59.50 until 31 Oct 2021
$59.50Buy
BUYING!XCheckout
Saurus 3
Synth
by Tone2 AudiosoftwareThe Orchestra Essentials
Orchestra
by Best Service
Featured
An Introduction to Paragon ST