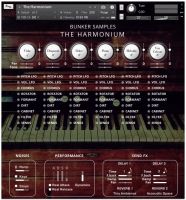 Independent volume, tone, and tune control of each stop makes it easy to shape the sound, and the performance controls lets the user chose between the real recorded note attack and release triggers, or shape their own with the ADSR. For those who wish to go further, the new Bunker Samples FX Matrix is a sonic playground, capable of everything from lush pads to distorted pulsing basses.