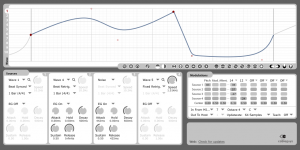 Cableguys has announced the release of MidiShaper 1.2.

Powered by Curve's unique modulations engine, MidiShaper brings Curve's flexible yet powerful LFOs and envelopes to all your favorite synthesizers and effects.

The new version gives you more opportunities to integrate your devices:

You can try MidiShaper for free. The demo is fully-functional and has no time limit, but you can only use one instance per song and you can't save presets.