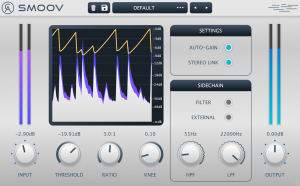 Is a chaotic track starting to get to you? Maybe you should make it a little more "Smoov". Smoov is a soft, clean and transparent sounding program-dependent compressor. It takes inspiration from hardware compressors of the past with a focus on peak detection, meaning that it can quickly and effortlessly react to incoming signals and blend them in with the surrounding audio field. When a busy track needs taming, Smoov softly settles your tracks.

The compressor uses a program-dependent envelope influenced by old hardware making the compression sound smooth and dynamic. The peak detection means that Smoov detects the actual amplitude of a signal, resulting in an extremely fast response to tame and control anything that is thrown at it.

You've got a big, groovy track you think you're happy with, but you have to ask yourself... "Is it Smoov?"