Defective Records Software has announced the release of version 2.0 of its Software Klee Step Sequencer. Previously only available as a hardware, control voltage sequencer, the Software Klee allows MIDI devices to be controlled by this innovative step sequencer. 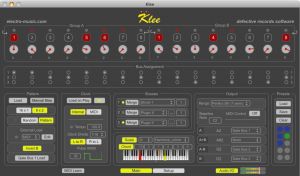 Plus, a few bug fixes, and optimization of some of the code under the hood.

The price remains the same as for version 1.0 ($40). The software is a free upgrade to existing version 1.0 users. A free demo is available for new users, for both Mac OS X and Windows.