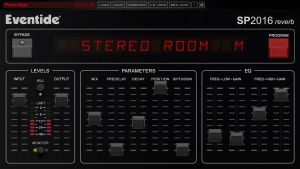 Eventide has announced the release of the new SP2016 Reverb, available as an AAX/AU/VST plug-in for Mac and PC, at an introductory price or $79 USD thru October 31, 2018 (MSRP $249 USD). Owners of Eventide's 2016 Stereo Room or Anthology XI can cross-grade for $29 during the promo period.

The SP2016 was the first programmable effects box available on the market. It introduced the concept of the 'plug-in' to the pro audio world back in 1982, with actual hardware chips that would be plugged in under the hood. Revered for its signature reverbs, the SP2016 was notably used by Dave Pensado, George Massenburg, Alan Sides, Roy Hendrickson, Jack Douglas, and Mick Guzauski. The lush reverb can be heard on countless hit records by Talking Heads, Adele, Mariah Carey, Eminem, and more.

The SP2016 reverbs have attracted a loyal user base by using a particular blend of art and science - the end result is an effect that sounds natural and distinctive. The plug-in includes authentic emulations of Room, Stereo Room, and Hi-Density Plate algorithms, each available in two versions: Vintage and Modern. The Vintage algorithms are true to the original box, all the way down to the bit-depth. The Modern algorithms are brighter, more diffuse, and use a higher bit-depth.

The algorithms naturally emulate every aspect of the sound of a real physical environment – from the complex early reflections, to the natural way in which the echo density increases with time, to the smooth Gaussian decay of the reverb tail. It's a powerful simulation that lends itself to parametric control.