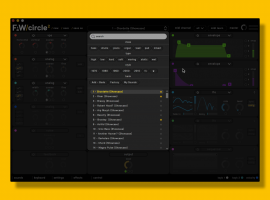 Future Audio Workshop has updated Circle to v2.1.2. The update contains a brand new bank, Analog 2018, where you'll find 20 rich, multilayered presets which reimagine the retro sounds of the past, bringing them firmly into the present (and beyond). The bank was designed by Tokyo resident C. Shinya, AKA World Bro Sound, whose clear master touch is owed to a championing of Circle since its original release in 2008.

Find Circle² in the KVR Marketplace