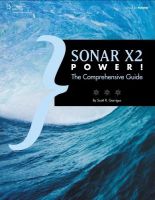 This new edition offers top-to-bottom detailed coverage of the SONAR X2 software (Producer, Studio, and Essential). The book's comprehensive treatment begins with the basics and takes you from setup to final mix with clear, step-by-step instructions and exercises.

If you're a new user, you'll start at the beginning and learn everything you need to know to use SONAR for recording, editing, producing, mixing, and sharing your music with the world. If you're already a SONAR user, you'll learn the details about all the new features in SONAR X2--and you'll sharpen your workflow and improve your music-making. SONAR X2 Power! covers everything from working with SONAR files and navigating projects to advanced editing, surround sound, automation, and much more.

SONAR X2 Power! is currently available at an introductory discount off the list price of $49.99. Readers can find more information (including a preview of the book), get updates, view video supplements, as well as place an order by visiting the Power Books website.