H.E. Audio has released the commercial version 1.0 of Poetic Guitar-8 Strings (PG8). H.E. Audio says that it is the first plug-in of an eight strings classical guitar. 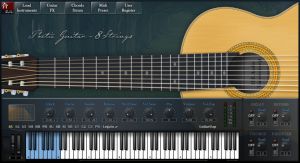 The range of eight strings guitar (A0-B4) is wider than six strings (E1-B4) and can play more vivid music of classical guitar. Fleta 8 strings guitar is specially made for guitar master Josep Henriquez by classical guitar-made-family Fleta of Spain, which is unique in the world. The samplings of PG8 were recorded by Josep in Peking A String Studio, where it was used to record some songs for the official album for the Beijing 2008 Olympic Games.