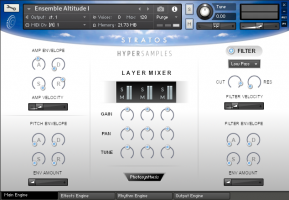 The resulting sonic palette ranges from organic, dreamy and magical vocal textures to intense and abstract hybrid sounds, which still retain an emotional quality and can find their home into hybrid orchestral, electronica, EDM, modern pop/rock and ambient productions.

Timbres and Presets
Stratos includes 120+ single presets and 24 Multis organized in groups of homogeneous timbres, articulated thru the categories named above and also presented in various nuances. The presets are also available with different envelopes, from fast attack to long swells, to make the workflow easier and faster.

Price: €39 MSRP - Stratos is available now at the Hypersamples website for an intro price of €29 until 15th of September.