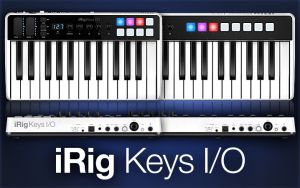 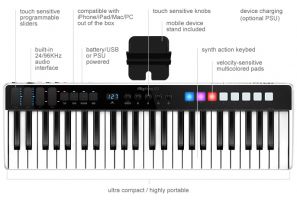 IK Multimedia has announced that iRig Keys I/O, an ultra-compact and lightweight controller with full-size velocity sensitive keys with high definition audio input/output, a software bundle and compatibility with iOS, Mac and PC, is now open for pre-order.

IK say that iRig Keys I/O is the only keyboard controller currently available with either 25 or 49 full-size velocity sensitive keys that integrates a professional audio interface featuring 24-bit audio up to 96kHz sampling rate, a combo input jack for line, instrument or mic input with phantom power, balanced stereo output and a high quality 1/8" headphone output ideal for use with the latest Apple devices like the iPhone 7.

iRig Keys I/O has 8 velocity sensitive multicolored pads and 2 programmable touch-sensitive sliders along with touch sensitive buttons and knobs in an ultra-portable package that is a snap to connect and set up.

IK says iRig Keys I/O 25 and 49 are the smallest full sized keys on the market making them a great solution for working in small spaces and for traveling musicians. In addition to running on USB power or an optional power supply (that can simultaneously charge an iPhone or iPad), they can also work on AA batteries.

Being certified Apple MFi keyboard controllers ("Made for iPhone and iPad"), iRig Keys I/O will work out of the box with all iOS devices with a Lightning port including the latest generation iPhone 7. The included USB cable connects to Mac and PC computers.

A collection of IK software and apps to complete finished productions is included. The full SampleTank 3 sound and groove workstation, Syntronik Pro-V vintage synthesizer, T-RackS Deluxe mix and mastering suite and more, can add up to a full-featured music production station.

Price: iRig Keys I/O can be pre-ordered from the IK Online Store and IK authorized dealers worldwide at the price of $/€299.99* for the 49-key version and $/€199.99 for the 25-key version. In addition to the bundle of included software, iRig Keys I/O also comes with 4 x AA batteries, Mini-DIN to USB and Mini-DIN to Lightning cables and a device stand for iPhone and iPad.