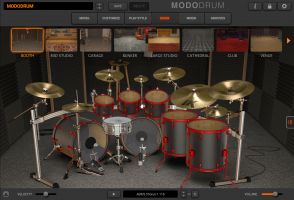 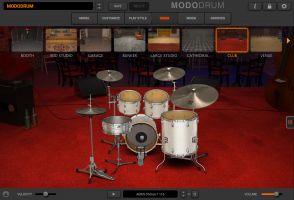 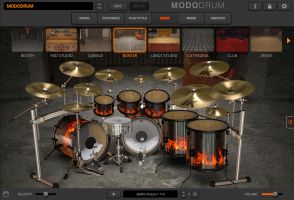 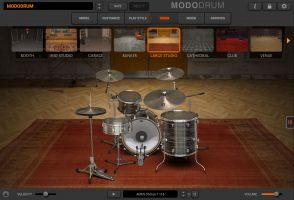 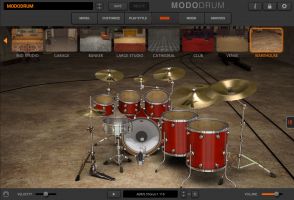 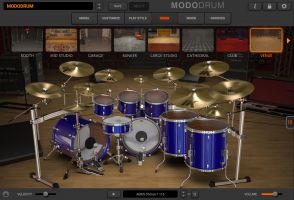 In a real recording situation, many factors affect the sound of your final product. MODO Drum accurately recreates all these factors, creating sound in real-time based on the ever-changing interactions between the player, drums, and room, mimicking the vibe of a real, live drummer. Enter the show room and find a drum kit that suits your style, then edit every element down to the finest detail, adjusting the skins, tuning and damping, diameter and height, the shell profile of the drum itself, and more. Cymbals can also be tuned and damping adjusted to ensure your entire kit sounds just right.

But MODO Drum goes even further, letting you adjust the way your "drummer" plays the kit. Adjust the location and accuracy of each drum strike, change stick types, kick drum technique and more to change both the tone and feel of your tracks. MODO Drum offers infinite round robins, so no hit sounds identical, just like a real drummer."

Kits can be placed in different environments, using convolution to mimic the acoustics of recording locations. There is a full mixer with sends and buses, as well as 19 studio processors and effects from IK's T-RackS and AmpliTube software titles to add the polish to any kit. An integrated Grooves manager offers more than 1400 grooves to help a user spark some inspiration or start jamming with full, pre-programmed drum tracks in seconds.

As a special thank you to current owners of IK's MODO Bass software, those users will also receive an automatic coupon for $/€50 off the Crossgrade version. Just be sure you are logged in on the IK site and add the item to your cart.