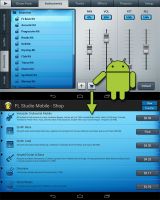 Image Line has announced that FL Studio Mobile 1.3 for Android is now available from the Google Play Store (the iOS version was updated to 2.3 before Christmas).

Version 1.3 is a free update for existing customers and introduces the online shop where you can download new instruments. There are two free instrument packs so you can try it out without spending anything. Version 1.3 also includes a few bug fixes.

What about iOS vs Android feature-set convergence?
Image Line plan to add Audio Tracks and Wave Editor by April 2014 so stay tuned for further news on that in the FL Studio Mobile user forum. They will be calling for Beta Testers in the near future so to gain posting access to the forum use the SETUP tab and REGISTER button. Following that they will be moving to a completely new code-base merging FL Studio Mobile for iOS and Android, eliminating the feature-set differences. Of course, all these are free updates as usual.