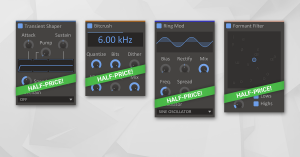 The Transient Shaper effect, now $19.50 (reg. $39), adjusts the dynamics of a sound, with a focus on the initial hit; the transient.

The Bitcrush effect, now $9.50 (reg. $19), is used to create distorting effects that sound like that of scraping analog radio or inherently lo-fi sound sources like old video games. It simulates the audio being sampled and replayed using a low-quality sampler with a limited sample rate and bit depth.

The Ring Mod effect, now $14.50 (reg. $29), modulates the input with either an internal signal generator or a secondary input signal.