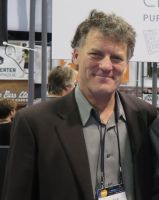 The Bob Moog Foundation has announced the addition of Chris Halaby to its Board of Directors. He joins fellow board members David Mash (president), Bill Sautter (vice-president), Jody Evans (treasurer), Daniel Keller, and Jerry Kovarsky. Halaby's addition is part of the Foundation's plan to grow its Board in 2020 to keep pace with the major strides the organization made in 2019.

Halaby is CEO of KVRAudio, Inc., a website/forum founded in 2001 as a community for musicians, music composers, and developers of music authoring products. KVR was acquired in 2003 by Muse Research, Inc, which Halaby founded in 2000 to conceive, design, develop, and build user-friendly, networked audio products that take advantage of computer hardware.

Prior to Muse Research Halaby was President, Chief Executive Officer, and Director of Opcode Systems, Inc. from 1987 until 1999. Under Halaby's leadership, Opcode grew to become a leader in music creation software, hardware synchronizers, and MIDI I/O devices. In 1999 Opcode was merged with the Gibson Guitar Corporation, with Halaby joining Gibson's the Board of Directors.

It's an honor to join Michelle and the current Board of Directors, and take part in their efforts to expand the reach of Bob's legacy with growing initiatives like Dr. Bob's SoundSchool and the Moogseum.

Halaby has served as Chairmen of the Information Technologies Subcommittee and member of the Executive Council of the Board of Trustees of the Berklee College of Music. He currently serves on the institution's President's Advisory Council.

We are delighted to have Chris join the Board at a time when the Foundation is expanding its efforts and its impact through our educational and archive preservation projects. The year 2020 promises to be an important time of growth for us, and we will be relying heavily on the expertise of our Board of Directors to help us achieve our strategic goals.

Halaby has over 30 years of experience performing and producing music, including several years spent with the George Coates Performance Works, the Gary Palmer Dance Company, ACT, and numerous other musical entities. He has performed at the Kennedy Center in Washington DC, the Doolittle Theater in Los Angeles, and the Herbst Theater in San Francisco. He holds a degree in Art from Stanford University and a degree in Guitar Performance from Berklee College of Music.