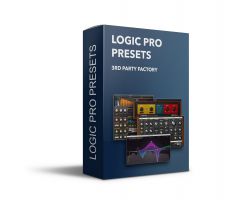 The 3rd Party Factory Presets Bundle enables the user to get universal access to presets from the default drop-down menu within the plug-in window, or from Logic's Library window and use keyboard shortcuts to quickly skip through presets.

This bundle contains all the factory presets in native Logic Pro format from the following plug-in packages: