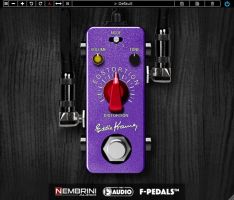 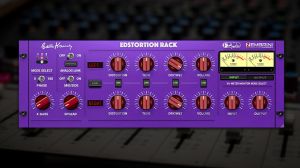 Francesco Sondelli, founder of F-Audiolabs, has joined forces with Nembrini Audio to create a series of plugins. The goal is to bring more analog sound, vibe and feel to an ever growing world of computer-based digital plug-ins.

With the talent and experience of Eddie Kramer on their side, F-Audiolabs and Nembrini Audio are launching their first release: Edstortion.

Like the original Eddie Kramer Edstortion Pedal by F-Pedals, the plug-in features 3 modes of classic distortion based on the legendary work of Eddie Kramer with Jimi Hendrix, Led Zeppelin, Rolling Stones, The Beatles, Traffic and many more.

The plug-in comes in two different versions, one in the shape and sound of the original pedal and one totally new, in a rack version packed with extra features and a sonic concept to serve primarily music producers and engineers. With just a few knobs tweaks you will be transported into the classic tones of the Golden Age of Rock.

Edstortion is a tool with an attitude to rock that allows you to achieve a wide spectrum of tones from heavy compressed distortion to very subtle crunch with great dynamics. Those classic tones will add presence, space, flavor and vibe to any production in any style of music from Rock to Hip-hop and dance.