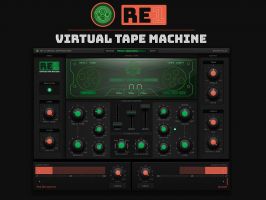 Numerical Audio has released RE-1 - a full featured virtual tape machine for iOS.

While RE-1 has no trouble creating everything from subtle tape-chorus and doubling effects over basic slap-back echos to wild multi-tap delays it can do much more than delay.

Utilizing the virtual tape-loop in multiple ways, RE-1 works great when used like a traditional looper with unlimited overdubs, tempo sync and a variable loop length of 1 to 8 bars. In addition, audio samples can be loaded onto the tape, making it a sample and loop player. Placed on a master bus, RE-1 works equally well as a mastering effect.

Dedicated controls for wow, flutter, tape-hiss and saturation make it easy to tweak the tape simulation while an interactive user interface allows real-time interference with the actual tape transport such as slowing down playback by touching the tape reels or reversing the tape direction.

In- and output sections are equipped with a set of filters which allow the removal of unwanted low-end before processing and further provide a boost or attenuation of high and low frequencies at the output.

RE-1 for iPad is available from the Apple AppStore for $4.99 (into price) until September 1st and regularly sells for $9.99.

RE-1Tape Emulation
by Numerical Audio  $9.99
Add A Review My KVR