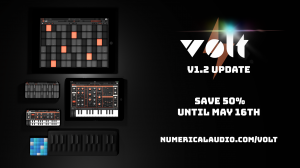 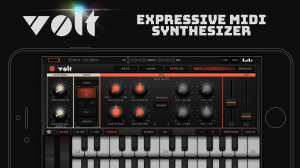 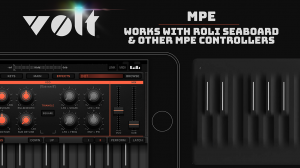 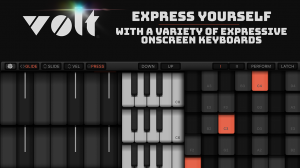 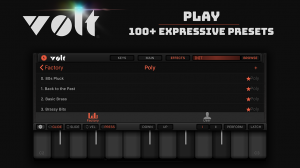 Numerical Audio has updated Volt to v1.2 adding a number of new features improvements and bug-fixes.

First and foremost, Volt is now universal and supports all devices starting with the iPhone SE. Additionally, iPad layouts have been also tweaked to better accommodate 10.5 and 12.9inch models and overall usability has been improved with more sensitive controls and realtime value readouts.

Next, the onscreen keyboard has received a makeover with a fresh new look, a new string style layout complete with scales, sensitivity controls, the ability to configure up to 6 stacked rows and a new fullscreen mode which is great for performing.

What's more, all layouts fully support MPE with glide, slide, velocity and pressure (on iPhones capable of 3d touch) making it 4d MPE compatible even without any hardware attached.

In addition, the 1.2 update adds support for multiple MIDI devices and channel settings making it possible to connect additional hardware such as breath-controllers or pedals when running in standalone mode.

Last but not least, the update includes a long list of bug-fixes addressing various issues including crashes related to audio hardware and preset changes as well as MIDI hardware and tempo sync.

For more info head over to numericalaudio.com/volt