NUSofting has released a Public Beta of Modelonia 2.0 for Windows. It is free to download and use until September 2011. 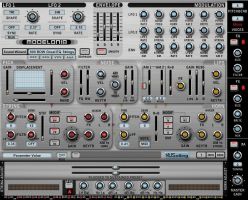 The free public beta is currently available for Windows VSTi - a Mac AU beta may come later. It includes 46 presets and features many enhancements and changes compared to the previous release (Modelonia 1.7 - 1.8).

Modelonia is a powerful "physical modeling" synth which uses a hybrid of two distinct model 'types' - a plucked-string model, and a blown-bore (i.e. trumpet-type) model. Each model may be used simultaneously and the signal path allows cross-modulation between the two models for more interesting and complex tones.

Find Modelonia in the KVR Marketplace