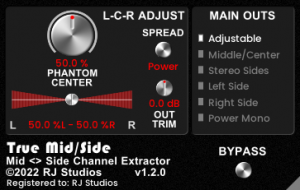 Traditional "Mid/Side" processing is often a misnomer for what is technically "sum and difference" processing. In this traditional approach the "Mid" output is simply the mono sum of left and right (M=L+R) while the "side" output is the mono difference of left and right (S=L-R). Any signals panned hard left or hard right - which are actually pure "side" signals - will appear in both the Mid and Side outputs. Meanwhile, the "Side" output is a mono mix containing both the left and right sides. This is not how we hear stereo and is not "true" Mid/Side.

True Mid/Side offers a choice of two different separation algorithms including the original "Linear" mode and the new default "Power" mode which produces even greater separation and detail in the side channels.

True Mid/Side features 3 pairs of stereo output channels including the Main Stereo Outs, Mid only and Side only outputs. This allows True Mid/Side to produce simultaneous Mid and Side outputs in DAWs and helper apps that can support multiple I/O pins.

True Mid/Side's "Power Mono" output mode produces a mono mix using true power summing of left and right channels (vs. typical simple addition/mix) which captures more of the ambience and balance that we hear in stereo for a fuller, more accurate mono mix.

True Mid/Side is a 64-bit plugin in VST, VST3 and AAX formats for Windows PC and VST, VST3, AAX and AU formats for Mac OS 10.11+ on Intel and Apple Silicon.