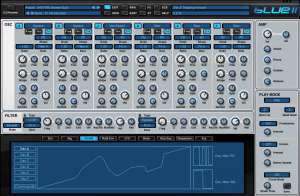 Rob Papen Soundware has announced availability of BLUE-II, an all-new reworking of its BLUE soft synth for Mac OS X (10.6 or higher) and Windows (Vista, 7, and 8).

Today BLUE-II remains true to that ethos with even more sound dimensions and features to its extended name, starting with six oscillators. These can be connected in various ways, together with two analogue-style modelled stereo filters with 27 different filter types, a large range of processing and modulation options, sequencer, and a powerful arpeggiator. A new range of specially selected waveforms based on samples have been meticulously fashioned for creating new and fresh-sounding synth sounds, so don't go expecting acoustic pianos galore here. However, since choirs and strings are an excellent basis for so many synth sounds BLUE-II has them in abundance — with much more besides.

BLUE-II takes the useful XY pad features from its virtual instrument sibling Blade and transplants them into its own workflow... perfect for time-based sound movements and vector pad-type sounds. Complemented by four top-quality FX processors, each offering 35 FX types, BLUE-II is a powerful virtual instrument.

But BLUE-II is also easy to use, thanks to its user-friendly user interface and an Easy Edit page for speedy sound changes, while the Bank Manager allows whistle-stop navigation through thousands of Rob Papen presets and artist sound banks covering a wide range of musical styles.

BLUE-II can be purchased as a boxed version from authorised Rob Papen dealers worldwide for €149.00 (including VAT/tax) / $179.00 or downloaded directly from Rob Papen here: www.robpapen.com/buy-blue-2

Upgrades are also available as follows: