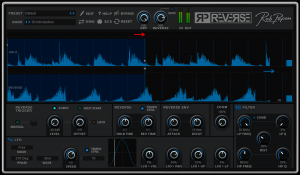 Rob Papen has announced the release of releases RP-Reverse.

RP says: "Thinking out of the box is part of what the Rob Papen brand ethos is, however, we do not want to lose the fact that plugins should be there for creating music. Well, here we present RP-Reverse which is an FX plugin for the creative minded artist that loves to add different sonic ingredients into their tracks."

RP-Reverse reverses the incoming audio in a creative way, the resulting audio can be tempo synced to make it easily fit the reversed sound right into your track. With RP-Reverse it is possible to trigger the recording of the audio (which is reversed) in various ways to which you can read about further on in the manual.

In true Rob Papen style, it's not just about the main feature. On the reversed signal you can also add distortion, two analog modeled Filters or a Comb Filter. On top of this, you will also find a handy LFO to modulate the reversed audio and the Filters.

Whilst using RP-Reverse in the creative process Rob Papen kept in mind that you might like to fade in/out the reversed sound or use a mute button. The top section, therefore, has a separate volume dial for the reversed audio and a separate mute button to make it easy to automate these functions in your music host program.

Price: $39 / €39. RP-Reverse is also part of the eXplorer-5 bundle so if you already own eXplorer-5 log into robpapen.com and download the latest eXplorer-5 installer and run it to add this new creative FX to your plugin list.

Find RP-Reverse in the KVR Marketplace